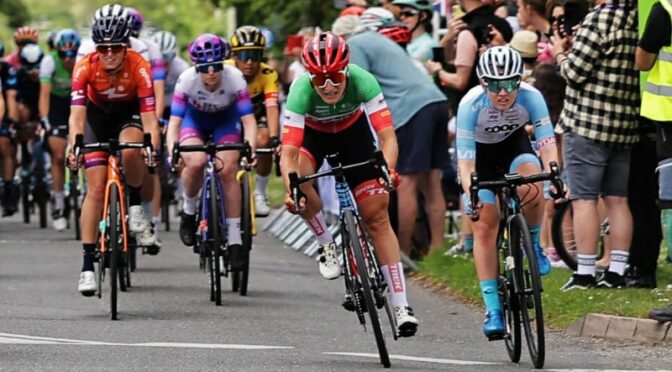 Team Coop – Hitec Products have been performing really well between all the big World Tour teams in the Women’s Tour. After six days of racing, Ingvild Gaskjenn ended in 11th place in the general classification, while only 21-years-young rider Tiril Jørgensen ended in 20th place. Ingvild also got top-10 results in the stages. “The team did very well the whole week and it’s been six fun days of racing.”

Ingvild got a lot of support of the four riders of the team that were riding the Women’s Tour. Next to Tiril that were home rider Jessica Roberts, Mari Hole Mohr and Ani Iversen, who was in a long attack in the final stage. “The team helped me on the last kilometers into the finals and into the finishing hill on stage 5. Then Tiril took me to the front of the bunch when the finish came closer. Against all the World Tour teams setting up trains, I just had to try to squeeze in on someone’s train.”

Dancing to stay warm
It wasn’t only the racing that Team Coop – Hitec Products impressed with. A video of Mari, Tiril and Ane dancing while the first stage was stopped because of an accident on the road went ‘viral’. After that, the team performed more dances during the podium presentations before every stage. “The week started off with a long and cold stage where we were neutralised for quite some time”, Mari tells about the beginning of that.

“We decided that the cold would not get the best of us and dancing would be the solution to keep warm. We thought it was fun that others were enjoying it as well, so we decided to keep up with the entertainment. I think doing this also kept us motivated and hyped before every stage and made the week so much fun for both the staff and the riders.”

Photo’s: SW pix – photo top; Ingvild in the mix in the sprint