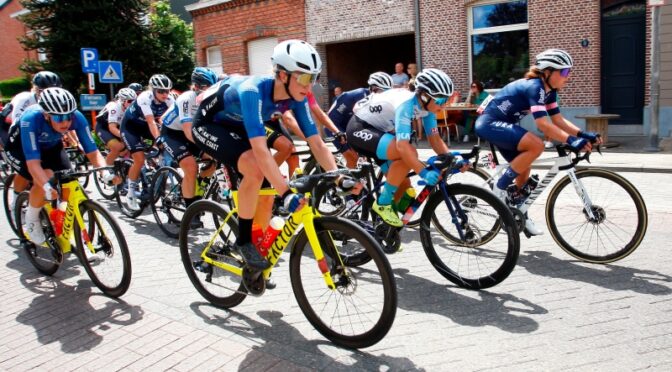 While one part of Team Coop – Hitec Products finished the Women’s Tour on Saturday, other riders of the team did two races in Belgium this weekend. On Saturday Dwars door het Hageland, a race with a lot of gravel roads, was on the program. Sunday the same riders came to the start in the Flanders Diamond Tour. In the second race, Emma Boogaard and Nicole Steigenga were able to score some points for the team.

“It was a really tough race”, Emma looks back on the first of two days racing. “In the beginning, Nicole had a flat tire on the first gravel lane. That was hectic for her. I was in the front at that moment, so I had to hold my position. On the gravel roads there were a lot of splits in the peloton and together with Christa, we ended up in the third group. After that there was not a lot of spirit anymore in that group. That was a shame, but we couldn’t do much more about it.”

The Flanders Diamond Tour ended in a bunch sprint. “Today was much better. We rode more as a team, even though we were a small team, with not so many girls. Each time we rode to the cobblestone sections we did a kind of lead-out. We were kept well up front, especially for Nicole. I myself helped Nicole in the last lap. The two of us were well up front, with the first ten riders. In the last kilometer we lost each other, so we started sprinting separately. We collected a few more points and have a good feeling about a nice weekend in Belgium.”