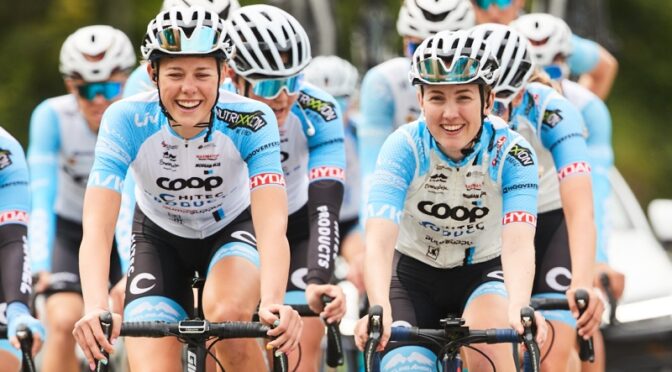 Team Coop – Hitec Products has shown itself well in the Ladies Tour of Norway. On home soil, the young team did good. Ingvild sprinted to a 12th and 13th place in stages 2 and 4, while she also ended 22nd in the general classification. First year elite rider Anne Dorthe Ysland became 30th in the end result, being the 6th rider in the youth classification, while Ann Helen showed herself with a long attack in the opening stage that started in her hometown Halden.

All reason to smile after the race on World Tour level, in which the team showed again that they work hard on the development of the future stars of Scandinavian cycling. “I am very happy about the race and glad that my shape is still good”, Ingvild told after the last stage. “We raced well together, especially the last two days. It was amazing to race at Norwegian soil, with all the flags along the course, and a spectacular mountain finish yesterday!”

Amazing days
For Ann Helen the race was extra special. On Thursday it started in her hometown Halden. After four days, the finish of the Ladies Tour of Norway was there as well. “It has been four though but truly amazing days”, she looks back. “I have tried to be agressive and was in several breakaways. It was extra special arriving to Halden today with my family and friends on the side line. We have worked very well as a team, and Ingvild ended up with a very good general classification. In addition we have been offensive and really contributed to each stage of the tour.”