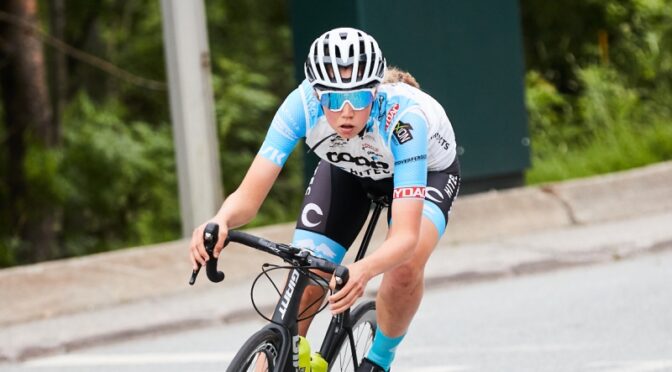 In Halden the Ladies Tour of Norway starts on Thursday. After four days of cycling, the race finishes in the same city on Sunday. For Team Coop – Hitec Products it’s the home race and the team is very much looking forward to take part. With almost all of the best teams in the world present, it will be four hard and fast days of racing at the Women’s World Tour level. All the action will be live on television.

Team Coop – Hitec Products will be lining up with a complete Scandinavian team of who five riders are from Norway. Ann Helen Olsen, Amalie Lutro, Anne Dorthe Ysland, Ingvild Gaskjenn and Mari Hole Mohr will race, together with Swedish Caroline Andersson. For Ann Helen the race is extra special. She is born and raised in Halden and makes her debut this year.

Home race for Ann Helen
“It is going to be incredibly special to race in my hometown”, Ann Helen says, when asked about starting and finishing in Halden. For her, cycling is also still quite now, as she started cycling just over five years ago and made her international debut this season. “The first time I got aware of this tour was actually when I was heading home from football practice, we struggled a bit to get home as the roads were closed. This must have been in 2014 or 2015, and I remember that I thought the race was really awesome. Two years later I brushed the dust off an old racing bike that was in the garage, and I quickly became eager to cycle more.”

And now, Ann Helen is about to start in the Ladies Tour of Norway herself; “I would have never thought that one day I would be racing in the tour, even though I secretly hoped to. I know a couple of this year´s stages well (stages 1 and 4) that go in my home areas, but I have also did a recon of the other stages. The team has performed well lately, so I think we can get some good results if we race well as a team. My goal is to contribute as best as I can for the team. I am really looking forward to the tour and it will be absolutely fantastic having my family and friends cheering from the sideline.”

Live on TV
It will be very good possible to follow the race live. Norwegian broadcaster TV2 will show live coverage of every stage. On Thursday and Friday from 15:30 to 18:30, on Saturday from 15:00 to 18:30 and on Sunday from 13:00 to 16:00. Around the same times, the race will also be live on the Eurosport Player and GCN app. More information about the race can be found at ladiestour.no.