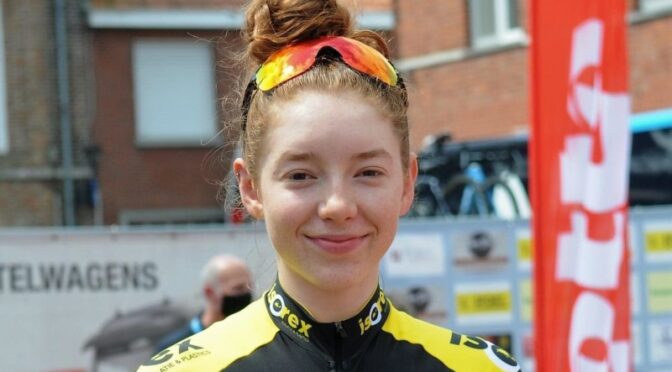 The talented British cyclist Josie Nelson immediately joins Team Coop – Hitec Products. Nelson, who is 19 years old and made her debut in the elite peloton this year, has signed a contract until the end of 2023. She is also the first new rider for next season’s squad, in addition to six riders who have already signed their contract. extended. “I’m really excited to be joining the team before the end of this season, it’s a fantastic opportunity and I’m looking forward to meeting everyone!”

After performing well in the Baloise Ladies Tour, Nelson in the past weeks impressed in several Belgium kermesse races. In Boezinge and Bambrugge she even took the win, showing that she can win bunch sprints from riders that have won UCI-races in the sprint. “I’ve always seen myself as a hill climber, but this season I’ve also done well in flat races with bunch sprints”, she says, when asked about the type of rider she is. “At the moment I’d probably say I’m an all rounder.”

Sports has always been a big part of Nelson’s life. “My older siblings all did cycling and swimming from a young age, so when I was old enough, I joined the local club too. I was 5 years old at my first club swimming champs, but eventually stopped swimming when I was 10. I did MTB, CX and road in the under 6 category and then started riding on the track at 10 years old. Last winter I spent most of the cyclocross season racing in Belgium and have recently spent the last 2 months racing on the road here also.”