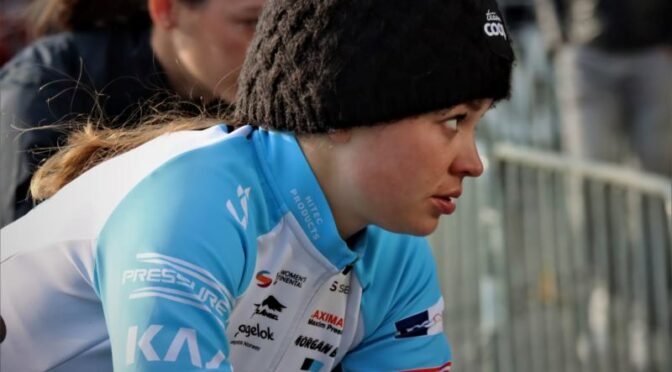 Less than two weeks after her second place in the Ronde de Mouscron, Nicole Steigenga has again become second in a UCI-race. This time she did that in the Leiedal Koerse, a new Belgium race on the calendar, that shows a lot of similarities with the men’s E3 Prijs. In the last 10 kilometers Nicole was together with three Parkhotel Valkenburg, with success covered a lot of their attacks, but then got beaten in the sprint for the win.

After a fast start of the race, Nicole attacked on the Paterberg, together with Mischa Bredewold. The two got a maximum advantage of 1.50 minutes on a small peloton. Behind them Femke Markus and Kirstie an Haaften (both teammates of Bredewold) then attacked from the group, after the peloton had reduced the gap to less than 45 seconds. With 10 kilometers to go they joined the front and the attacks started. Nicole covered them all, showing her strenght and even then managed to get second in the sprint.

After catching her breath, Nicole looked back on the race: “When the climbs started I didn’t think they were going very fast. However, before they started the pace was high. Pernille, Tiril and Ane already had been in a few escapes at that moment. It was good that they did. After that I kept calm on the first climbs. On the Stationsweg I attacked  for the first time and Mischa was the only one who could follow at that moment.”

Attack with 60 kilometers to go
It was a first sign about what would be possible on the nine hills of the day. “Four riders came back to us”, Nicole continues. “But we didn’t really ride anymore at that moment, so we got caught by the peloton. Mischa then attacked the Paterberg and I was the only one who could follow her. The two of us were gone and on the Oude Kwaremont we managed to extend the lead. I knew it was going to be difficult with just the two of us, but I thought we’d better just keep going.”

After the hill section, there were still 45 kilometers to go to the finish. “In the last ten kilometers the other two joined. I knew that Mischa was not going to ride anymore when they were coming and I thought I better save myself for what was to come. I managed to react quite easily to all attacks, but unfortunately it was just not enough in the sprint.”

‘Happy with my current shape’
Reflecting on the race, Nicole also knows that a second place is already a big performance, in a final that evolved like this. “Of course it wasn’t easy with three riders of them. I think Femke was also a bit fresher than us, because of course we had already raced about fifty kilometers together. When I look back, I think I can be happy with this result, if you look at that situation. And I am happy with my current shape.”