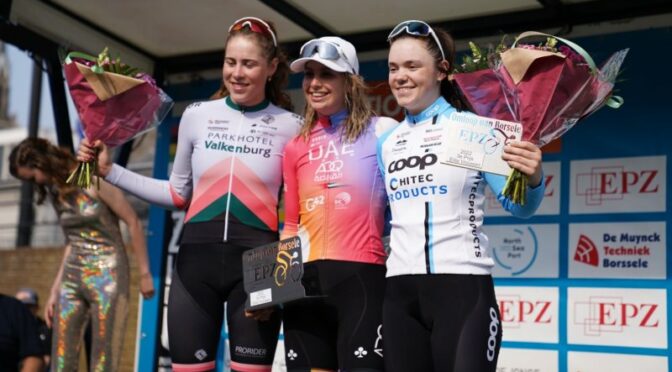 Only five days after the first international podium spot of the season, Nora Tveit has given Team Coop – Hitec Products already its second! In the EPZ Omloop van Borsele, the 19-years-old Norwegian rider finished third. Nora belonged to a group of 6 riders that sprinted for the second place, behind solo winner Maaike Boogaard (UAE Team).

“It was a hectic start and we managed to be at the front of the start line”, Nora looked back after the race. “That was great for us, as the race started right away. Unfortunately there was a crash already after 5 kilometers. I was lucky to be right in front of it.” Nine riders got away in a leading group and the rest of the peloton would never see them back. At least, not all of them, as two riders got dropped.

“After that crash, we were a small group in front that held on to the gap for the rest of the race”, Nora continues. It was Boogaard who was able to attack with three kilometers to go. As Parkhotel Valkenburg had three riders in the group, the chase was up to them, but Boogaard was gone and won solo. Only Sofie van Rooijen was then faster than Nora. “After an entire day in the breakaway, I am super happy to take the third place in the sprint!”