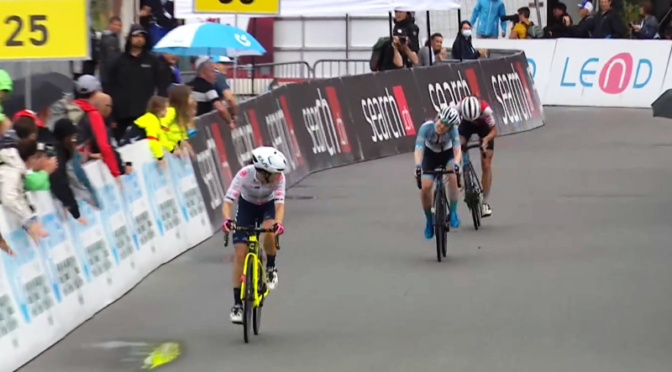 With a 6th place in the third stage and 9th place in the fourth and final stage of the Tour de Suisse, Ingvild Gaskjenn again took some good results for Team Coop – Hitec Products. With the help of her teammates and also attacks of Nicole Steigenga, the team was again able to show itself in a stage race with a high level. “All in all I am very happy with the whole team and what we could do this week.”

It was with pleasure that Ingvild looked back at the four days stage race, even though she wasn’t so sure what to expect before the start. “After the Women’s Tour I was tired, so I was just hoping that I would recover enough for this race”, she says. “Luckily I did! I didn’t have high expectations, because I was quite tired, and also I knew it was going to be hot, something I struggled with before.”

The race started on Saturday with a very hard criterium, followed by an individual time trial on Sunday and then two climbing stages. “Stage one was fun and fast, and actually the one I thought would suit me the best, but it only went okay. For the time trial I had zero expectations. I just went through, but not all out, to save for the last two stages.”

Last two days
It became the two stages in which Ingvild got her best results. “On stage three I felt really good, and the finish suited me well. Unfortunately I was forced off the road and fell to the back of the bunch with only 400 meters to go. So I was very happy I could still get 6th! Nicole was in the early break, which was super good, and Caroline and Tiril were strong, until Tiril unfortunately crashed. Stage four was over my expectations, as I don’t see myself as a pure climber, and usually prefer shorter hills. Nicole did an amazing positioning me and Caroline in the beginning.”

Attacking and helping
Nicole indeed also rode a good race, but in a different way. “For me it was a bit too hot and too much climbing”, she looks back. “I had hoped that the first day would be a bit flatter, but there was also a tough climb in it. In combination with the heat, that made it very difficult. The third stage I tried to survive the first climb by going into an early attack and was able to stay away until the top, so that was nice. The last day I tried to help Ingvild and Caroline as much as possible in the first 30 kilometers, so I was done quite quickly.”