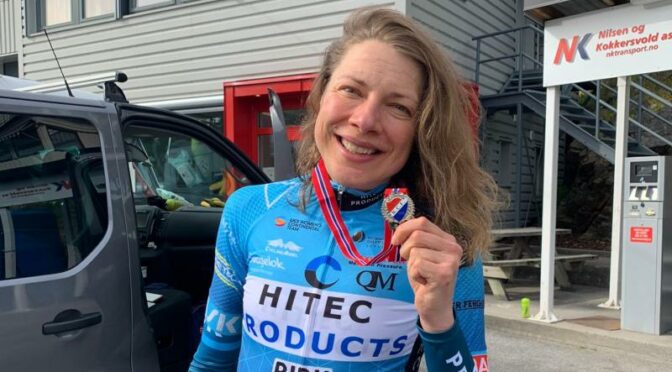 Only six weeks after she broke her arm doing a training ride, Vita Heine did an amazing performance by winning silver at the Norwegian time trial championships. After a ride over 30 kilometers, she came only seven seconds short to successfully defend her title. The gold was for Katrine Aalerud (Movistar), while Elise Marie Olsen (Drops) took the bronze.

“I am very happy with the race, given my situation”, Vita said after the podium ceremony. During the time trial she had the fastest time halfway the course. However, the lack of riding on the road and the three 360 degrees turns weren’t in her favour. “I come directly from six weeks on rollers. I also could not stand on the bike today, so I lost seconds at both the start and the three turns we had to make.”

Mixed feelings
Not being able to train outside had his influence on what Vita could do to work towards this championships. She however did what she could. “I was 20 watts from my normal performance level due to a lack of good training outside”, she tells. In the end, Vita had mixed feelings after the day. “I am very happy with my performance, but I also got disappointed after te finish as I love to win.”