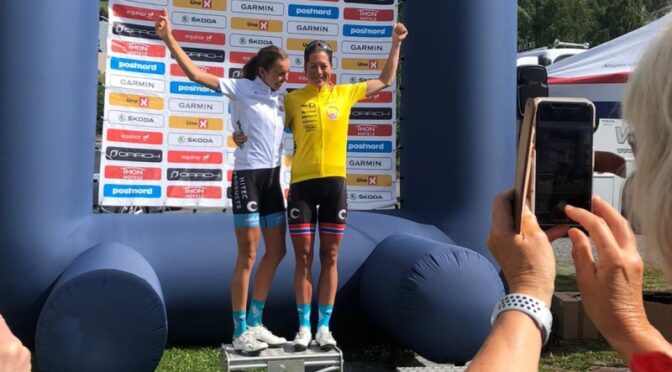 Team Hitec Products – Birk Sport had a good Tour te Fjells. After four days of racing Norwegian champion Ingrid Lorvik won the stage race. She laid the foundation for that overall victory by winning the hard third stage on Saturday. On Sunday Pernille Feldmann gave the team a second stage win, by winning the closing stage in a bunch sprint. After two second places and a third place, Amalie Lutro finished third in the overall classification and won the youth classification.

On Thursday the Tour te Fjells started with an uphill time trial, that was won by Stine Borgli (FDJ). Amalie, only 20 years young, impressed with a second place, only three seconds behind Borgli. Ingrid took the third place. In the second stage the podium was exactly the same. Then Ingrid got herself the yellow jersey by winning the third stage, that had an uphill finish, solo. Amalie stayed with Borgli and they finished 27 seconds behind Ingrid.

Last stage
In the final stage it was important to focus on keeping the yellow jersey, but in the end the team even got a second stage win. Pernille won the bunch sprint, beating former team member Emile Moberg. “It was a hard race”, Pernille looks back. “The main goal was to keep the GC for Ingrid and if it was all together, I was going to do the sprint. In the last corner I took the shortcut and just went for it. It was a long sprint and I didn’t think I would take the win. But I did and it was really cool to take both the GC with Ingrid and the stage win.”

Happy Ingrid
After four days of racing, Ingrid stood on the podium with the yellow jersey over her shoulders. A great feeling. “It have been four good days and it was really fun to race again”, she says. “I was a little bit disappointed after the first stage, but the last two stages were just fantastic. I’m really happy with the GC win and it was so cool that Pernille showed how strong she is and took the last stage.”