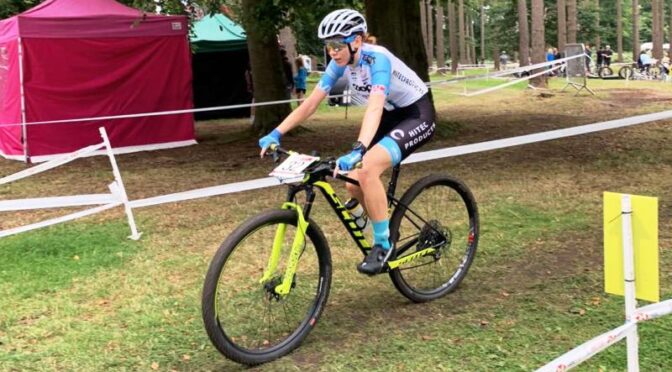 With Nora Tveit on the track, Team Coop – Hitec Products already had a rider in the team that also competes in another discipline than road cycling. Recently Josie Nelson joined the team and with that, off-road cycling is now also added as a discipline. On Sunday Josie competed in a national mountain bike race in her own region. And guess what? She won! “It felt really special to win my first elite race on my home course!”

For the 19-years-young rider, who just came back from last week’s Challenge by La Vuelta, there was no road race this weekend and so she decided to do a mountain bike race. Josie: “I decided to race the last round of the National MTB Series, because it was close to home and I wanted to do some of the other rounds this year, but was busy racing on the road. I hadn’t done a mountain bike race in two years, but was hoping I’d still got it from when I was on the National MTB Squad in 2019.”

The race got a thrilling final. “It was a really close and exciting race between me and Anna Flynn and all came down to a sprint finish. She attacked me on lap two and got a small gap, but I managed to pull it back on the climbs and the same again on lap three. After that it calmed down for the final three laps, but we were both on our limits. At the time I wasn’t sure how she was feeling and was expecting her to attack me on the final lap, so I was quite surprised when I rolled over the line a few seconds ahead of her!”