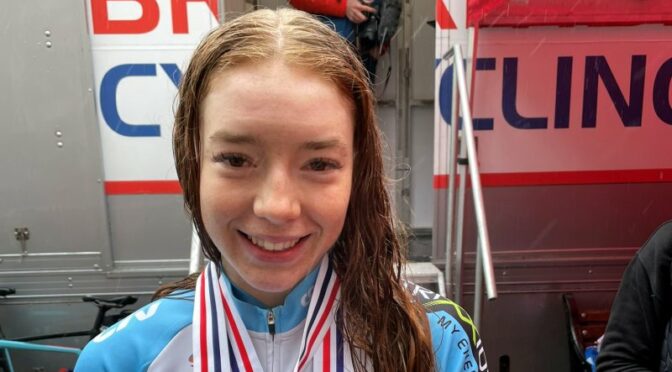 On Sunday, it was a good day for Team Coop – Hitec Products. In the Chrono des Nations Mieke Kröger got third. On top of that, Josie Nelson impressed with a silver medal at the British championships. After a hard battle for the win, with riders from several World Tour teams, Pfeiffer Georgi from DSM was the only rider that was earlier at the finish. “Super happy to come away with a second place at the elite national championships”,  was her first reaction.

After some time to reflect, Josie looks back on her day on the saddle. “The race was wet the whole way through, which made the conditions a bit harder”, she says. “It was a bit of a different course for Britain, as it had a cobbled climb, which isn’t very common here. I really liked this, as I’ve done quite a lot of cobbles this year and enjoy them especially in the wet. The bunch split the first time up the climb and a break of 12 formed, which I was in.”

The break was a very strong one. Not only Georgi was there, but also riders like defending champion Alice Barnes (Canyon-Sram), Anna Henderson (Jumbo Visma) and Anna Shackley (SD Worx), while Drops-Le Col had three riders in the group. “I was confident it would stay away, as all the riders were really strong and we worked together well. Pfeiffer Georgi attacked up the climb with four laps to go and split the group up, but we mostly got back together maybe losing one or two of the riders.”

The race could be followed live by everyone at home, as it was streamed on Youtube. People who were watching saw an exciting race, with a lot of attacks. “On the last lap there was quite a few attacks which weren’t successful and the group ended doing a lot of cat and mouse.” April Tacey got away in the last few kilometers and started the final climb solo, but she also got caught. “I made sure I was near the front of the group at the bottom of the climb and went full gas up it to finish in second place!”

Chrono des Nations
In France Mieke Kröger and Ane Iversen started in the Chrono des Nations, an individual time trial with the UCI 1.1 classification. Marlen Reusser, the silver medallist of both the olympic time trial and the world championships time trial, took the win. After 24.6 kilometers, Mieke came 52 seconds short on her. So did olympic road race champion Anna Kiesenhofer, who became second. Ane lost 2.35 minutes on Reusser, with which she got a good twelfth place in the results.