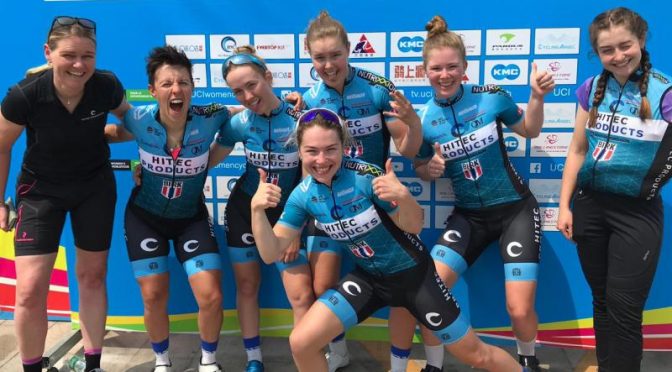 While half of Team Hitec Products – Birk Sport were racing the Tour of Uppsala, the rest of the riders raced on the either side of the world. In China, six riders of team participated in the Tour of Chongming Island. With success, as Team Hitec Products – Birk Sport won the team classification in the three days Women’s World Tour stage race. “Overall we did great as a team in all stages.”

One thing was sure in China; Lorena Wiebes was the strongest sprinter of the pack. The Dutch rider of Parkhotel Valkenburg won all three stages and with that also the general classification. Despite that, the Team Hitec Products – Birk Sport riders could be satisfied. “We rode well as a team every day and I think we can go home really pleased with ourselves”, says Lucy Garner.

It was Garner who took the best result herself. She finished third at the second stage on Friday, the first podium spot in a World Tour race for the team this year. “My own personal goal was to get on the podium, so I’m really happy I was able to achieve that on the second stage. The girls helped me to make that possible, with looking after me and making sure I didn’t waste energy. The first stage we already did well and got 4th and 5th, so we knew we would be able to contest the sprint to get a podium.”

‘A bit more aggressive’
With chances on winning the team classification and the hope for another good result, the last stage was perhaps the hardest. Lucy: “The racing was a bit more aggressive than the last two days. There was still a lot that could happen in the general classification, so teams were wanting to break away. All of our riders were at the front the whole day and jumping with moves. Everyone did a brilliant job! Marta won one of the bonus sprints, so that also gave us some confidence going into the final.”

Nice reward
In the end, for the third day in a row the race ended in a bunch sprint. “We wanted to do well on the team classification, but also make sure we got the best result possible. I’m pleased I could get 5th. I didn’t have the best sprint legs today but gave it my all, so I’m satisfied. I think it will be good for Lonneke confidence that she was also top 10 today. Everyone rode really strong and brilliantly as a team, so I think it’s really nice that we were rewarded best team after all the hard work we have done these past three days.”

The only blemish on the three days was that Grace Garner broke her collarbone on the first day. We wish her a speedy recovery!