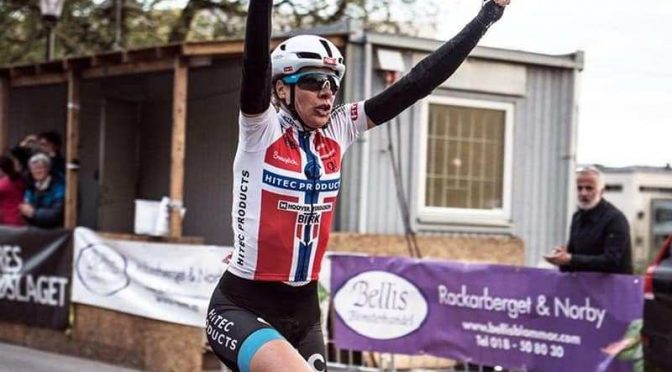 On Friday, Vita Heine won the last stage in the Tour of Uppsala. She escaped in the final of the stage and won solo, taking the first win of the season for Team Hitec Products – Birk Sport. At the finish she had an advantage of fifteen seconds on general classification leader Sara Mustonen. Exactly the difference in team between them in the ranking. Time to look back on the race with Vita.

“The team worked super impressive in the last stage”, says Vita. That is exactly what she needed, as the team had to make a hard race of it. Then there would be a bigger change that the stage didn’t end in a bunch sprint again. “Ingrid felt better after being sick. All riders attacked a lot to tire out the other teams.”

It helped, but for a long time wasn’t enough. “The course was too easy to split the peloton, despite of the huge effort from us. In the last lap I attacked and got company of Sara Mustonen and a Russian girl. We rode a bit together and then I attacked again and rode to finish line alone.”

Same time
Vita gave all she had, to take as much time on Mustonen as she could. She even waited with celebrating her victory, untill she already passed the finish line. It was just not enough to take the overall win. “It turned out we had the same time in the general classification”, says Vita. “But Sara Mustonen won the race, because of better placing in the results of the three stages.”