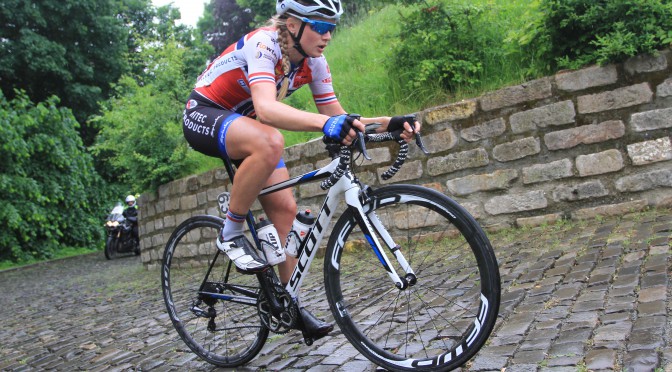 Already early in the race Julie was of the front with five riders but the breakaway was short-lived. Not long after a new breakaway formed with four riders including Thea. Behind them a chase of three formed with Miriam who soon after joined the four leaders. With the though weather and rain the ascent of the Muur van Geraardsbergen proved slippery. It caused trouble for Thea who found herself forced to run parts of the though climb while seeing the breakaway slip away from her. After Bosberg eleven riders was of the front including the likes of Vos, Johanson, Elvin, Van Vleuten and Mustonen to mention some, leaving Miriam in good company. Van Veluten and Johanson escaped the front as the rest of the breakaway was caught by the peloton. In the tough chase the peloton got smaller and smaller and after being in a long breakaway Miriam eventually had to let go.

With two k’s to go the leaders were caught by the reduced bunch. Vita was our rider to make it to the final after strong riding from her and her teammates. She eventually finished to a 16th place, a little disappointed with herself after some blunders in the sprint. Although not a podium still a strong race by our girls showing grit and determination.