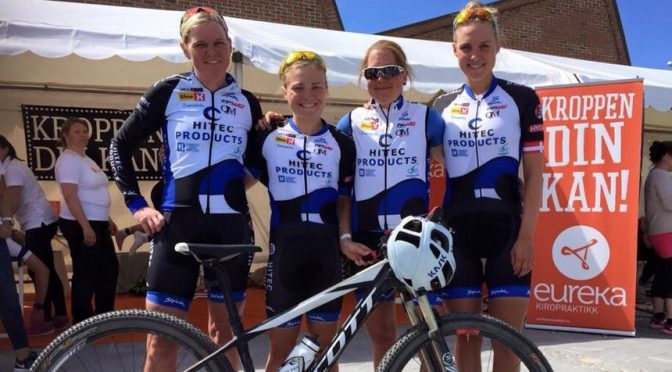 Our girls have been racing in Slovenia and Norway past weekend. Friday Cecilie and Vita raced the ITT Ljubljana – Domzale – Ljubljana in Slovenia with the National team. It was Cecilies first race after her crash in California three weeks earlier where she broke her collarbone and shoulder blade. She made a really strong race and finished 4th, Vita also did a strong ITT despite having a cold finishing 7th.

Saturday Emilie, Julie, Tone and Ingrid changed their road bikes for mountain bikes to race the popular gravel race Nordsjørittet, hosted in Hitec Products home city Sandnes. The girls not only won the race with Emilie but also set a new best time for women. They placed second with Julie and third with Ingrid and also got both intermediate sprints with Tone and Emilie, a great result in the local race.

In the evening Thea, Miriam and Janicke raced the criterium which was part of the national ranking, also held in Sandnes. Thea and Miriam kept attacking trying to get away and also keep the speed high. They both almost succeeded several times, in the final lap Miriam was caught with two hundred meters to go setting up Janicke perfectly for a sprint victory.

Sunday all seven girls raced the Norwegian Cup in Sandnes. The girls raced an aggressive race working hard to get away. On the 4th out of 5 laps Emilie succeeded to escape alone. Miriam followed a group going after and then managed to escape this group bridging up to Emilie. Miriam crossed the line first with her break away comrade in second, both showing strong form ahead of the Aviva Women’s Tour and Nationals. In the bunch both Tone and Julie was caught in a crash leaving Julie with a fractured hand and out for next four weeks. Tone was also injured but no fractures leaving her ready to race the Nationals next week. An unlucky end to an otherwise good week.