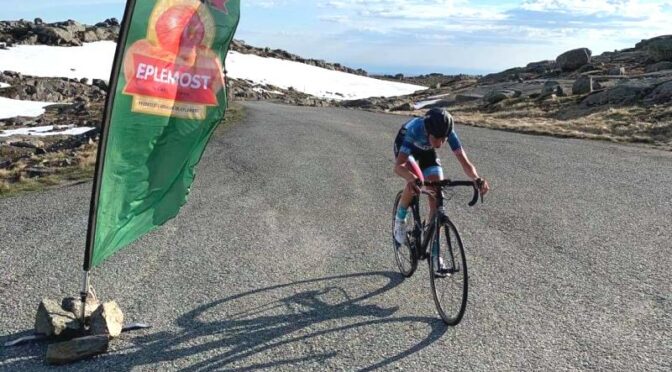 For some of the Norwegian riders of Team Hitec Products – Birk Sport, the 2020 season has restarted. On Sunday Amalie Lutro won a 10 kilometer time trial in Tjelta, while Pernille Feldmann ended in fourth place. For Amalie it was her second time trial in four days, as she competed in a climbing time trial on Thursday. She then finished second behind Stine Borgli (FDJ). “It was super fun to feel some race-nerves again.”

On Thursday, the local time trial went over a distance of 5.5 kilometers, with an average climbing percentage of about 8%. “I had some knee problems lately”, Amalie tells. “But it is really improving fast and I think I will be back in full training this week. My final time was 18.56 minutes, while Stine finished in 18.16 minutes. As I didn’t train properly in the week before, my legs weren’t too good. I wished I would have been able to push more on the less steeper parts of the hill, but for now it was okay.”

The time trial on Sunday felt better for Amalie. “My knee also felt better. I quickly found a good flow and managed to keep the power up throughout the whole race. I could feel that I miss some speed in my legs.  But that is something I will fix quick enough, when it is time. It was a long wait to pin on a number again and it was nice being able to start feeling the race mode again.”