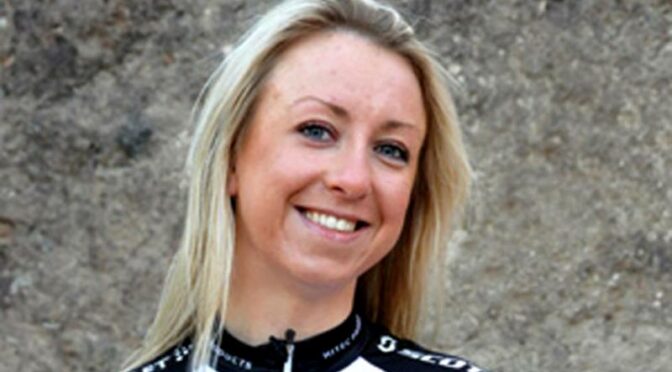 Becoming Norwegian road race champion that year, Lise Nøstvold joined Team Hitec Products in 2010. She raced for the team for three seasons. In all those years the now 33 years old former rider competed at the world championships. Now Nøstvold is still involved with the team, as she is the team doctor. But what more happened after her cycling career? This time we asked her the six questions.

Nøstvold even won a second Norwegian title. In 2012 she was the fastest of her country on the time trial bike. Besides that she got a few great results in about 2,5 years of racing. One of the best was a 13th place at the world championships in Copenhagen, where Giorgia Bronzini sprinted to the world title.

1. How are you doing and what does your life look like now, since you retired as a cyclist?
I am doing well, even without the bike! Since 2013 I have been working as a doctor, and I’m now a surgeon specializing in urology (the urinary tractus). I am married and have a crazy two year old son who nearly reaches the pedals of his first bike

2. You were a cyclist for Team Hitec Products from 2010 to 2012. How do you look back at that time?
I started riding for team Hitec in 2010, just about a year after I got my very first bike that could do more than just take me to the store. I was also a full time medical student on the side, thus having my plate full of new challenges.

I had a good physical condition, but had to start from the rock bottom on ‘everything’ else. Joining the Hitec girls, I was shown such hospitality, patience, loving discipline, and not least a team spirit that made you feel like a member of a funky family. Looking back on those years, I’m smiling every time. The blood, sweat and tears are all long forgotten. 3. How do you look back at your cycling career in general?
I look back on my career with gratefulness and pride, knowing what a bunch of girls can achieve together. I got to test my limits in several ways, see how the world works outside of our little padded and secure corner up in the outskirts of Europe, and experience that indescribable feeling of crossing a finish line after having exhausted every single cell in my body. I have met so many wonderful people who have taught me not only about cycling, but also valuable life lessons.

4. Thinking about your time with Team Hitec Products; what is the first thing or moment that pops into your mind?
That’s definitely Hof Ter Kammen – our team lodgings in Belgium – where we spent our days in between riding our bikes.

5. The team is now in its twelfth year and with that it is the oldest still existing UCI-team. How do you look at that?
That is definitely not surprising at all. Team Hitec is Tone and Karl’s passion and pride. Knowing how much they love the sport and team, I’m not surprised if there still is a team Hitec in another twelve years.

6. What are your hopes for the future of the team and Scandinavian cycling?
I hope that both team Hitec and women’s cycling all together will be given the opportunity to show the world that the sport deserves the same frames as the men’s version. The women’s races are just as (if not more) eventful, and contains a collection of characters and athletes that parallels men’s cycling. The women won’t disappoint the spectators and fans.