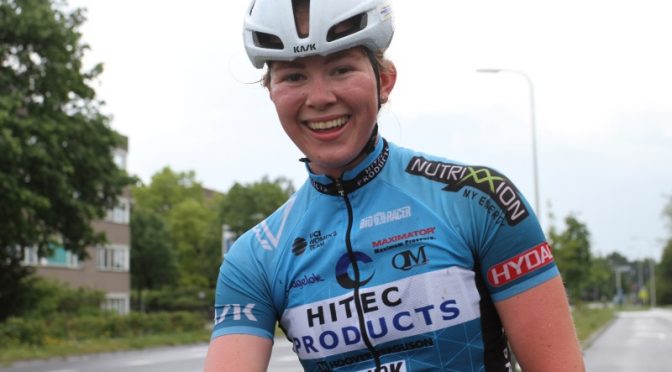 Where the peloton in the Netherlands splitted because of the hard wind, the race in Belgium was more one for attackers. And a lot of attacks happened. The Team Hitec Products – Birk Sport were very active. First Lucy Garner was in a leading group of eight riders, when they got caught Marta Tagliaferro rode away with another rider and when they also got caught, Ingvild Gaskjenn escaped for a solo. The peloton didn’t let go, so a bunch sprint it was.

“Yesterday we races already very good en today I felt well again”, Lonneke tells us after the race. “The team was riding very strong. The race really opened when we did the Rode Berg three times. We then were in front whole the time and were involved in all attacks. Today the plan was to go for me in the bunch sprint, but we yesterday also learned that the attackers have chances too. So, everyone was free to go with those attackes as well.”

Good progression
For Lonneke the fifth place is her best result so far in a one day UCI race. A very good result for a rider who is only in her first year with the elite women. “Of course I would like to be on that podium, especialy because the team was riding a superb race, but for me personaly I can be very happy to get a result like this. At the beginning of this season, in March, I would have been dropped on a climb like the Rode Berg. Now I came on top of the climb with the first riders of the peloton and ride a good final after that. It is good to see that progression.”