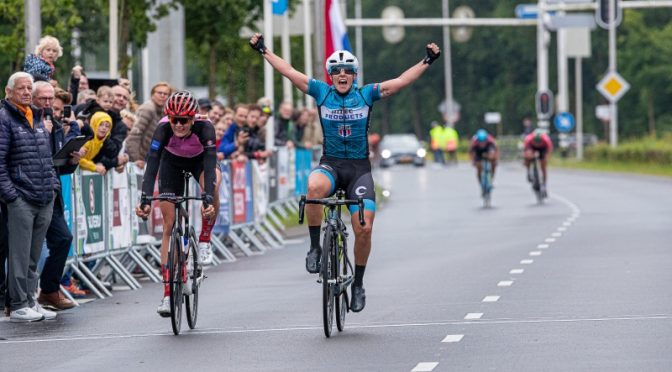 A little bit more than a week after Vita Heine won a stage in the Lotto Thüringen Ladies Tour, Marta Tagliaferro has given Team Hitec Products – Birk Sport a new victory. The 29-years old won the Omloop van de IJsseldelta, a UCI 1.2 race with start and finish in Zwolle. Marta joined Pernille Mathiesen in de last kilometers, in an attack from a twelve riders big front group. She then was the fastest in the sprint.

“I actualy can’t really believe yet that I won this race”, Marta said after the podium ceremony. “It has been three years since I won my last race. Pernille had a really strong attack. In a moment I thought that I couldn’t close the gap to her, but I could. I knew also that my way to win was to get in that final 200 meters with her, because I thought that I would be faster in a sprint. So my goal at that point actualy was to arrive at those last 200 meters together with her.”

The riders didn’t get any rest during the race. There was a lot of wind and it didn’t take long before the peloton broke into several groups. Marta and Lonneke Uneken were in the first group, Lucy Garner in the second group. “It was a really fast day. In the beginning the wind was from the back and it went really fast. The peloton splitted emmediately. It was almost easy to find the right breakaway, but we knew that from that point it would still be a long race.”

The right moment
Fifteen riders were in the first group and in the end there were twelf riders left to fight for the win, while in total only 28 riders made it to the finish. Marta: “We knew that it would be really hard to beat Lorena Wiebes in a sprint. Before the start we planned already that if we would be there with at least two riders, we would play two cards. One would attack and the other rider would save her legs for the sprint. In the last five kilometers, when everybody started to attack, I thought it was the right moment to take my chance. And in the end, we did it.”