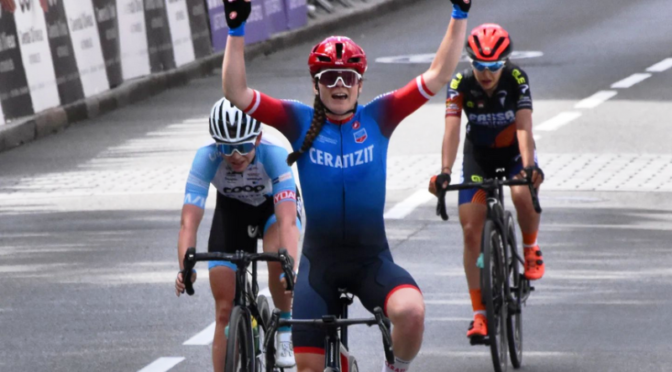 Dutch Team Coop – Hitec Products cyclist Nicole Steigenga is on fire. Within a period of three weeks, she has secured four podium spots for the team. After becoming second in the Ronde de Mouscron and Leiedal Koerse, she now also got second in both the second and last stage of the Bretagne Ladies Tour. It was the result of strong work from the whole team during the five days long stage race in France.

The Bretagne Ladies Tour had its first edition and that didn’t disappoint. After the last stage, Nicole looked back with us on the stage race, that was also a good learning experience for the team. “It was a fun race”, she starts. “In the beginning I kind of missed the team up front, but that got better every day. Later on we were always well in front, so that I didn’t have to react every time to every escape.”

Success was already there the first days, with place nine for Nicole on Tuesday in the opening stage and a second place a day later. “The first stage I was with Josie in a breakaway in the final. Unfortunately we were taken back three kilometers before the finish, but luckily I was able to position myself well, so I still finished well. The second day it was an attacking race all day, but no group really got away until the local lap. A group of thirteen riders who were important for the general classification then escaped. I was able to jump in and sprint to second place.”

Time lost in the time trial
At that moment, Nicole was also fourth in the general classification. On Thursday however, she lost time in the individual time trial, as over 19.5 kilometers, she almost had a few crashes and got 31st on two minutes from the winner. “The time trial wasn’t bad, but I’m not necessarily a specialist, especially not on this course”, she looks back on that. “And you also lose it from the big teams in terms of material on those days.”

On Friday there were new chances. “We again ended with some local laps and these were hard. On the climb there were quite some attacks, with Josie, Caroline and me always succeeding in jumping with them. As a result, we didn’t really have anything left in the final. We did finish in the first group of thirty, but there was not a very good result.”

‘We all want to go for it’
In the last stage on Saturday, Nicole again got a good chance to show herself. “I think today was the easiest day of the stage race, if it comes to the way of racing. I had the idea that I could be part of a leading group in the final. On the local lap I had tried to attack a few times and then the third time I managed to ride away with Marta Lach and Greta Marturano. They really wanted to go for it and if everyone wants that, the pace is also good.”

There was no room to hesitate anyways, as the peloton wasn’t that far away and in the end came only six seconds short at the finish. “I thought Marta was the strongest and tried to keep up. In the sprint I didn’t play it very smart. Marta started the sprint early. I should have jumped to her wheel right away, but I thought the Italian girl would close the gap and wanted to pass then. If I look back, I should have jumped in immediately, but I don’t know if I would have won.”

Great week
With two second places in the stages and a 13th place in the general classification, it was a successful week for Nicole. But not only for her. The other riders showed good form as well, helped Nicole in the race and got some good results for themselves. Nicole: “We had a great week here in France and I think as a team we can be happy with how we raced.”