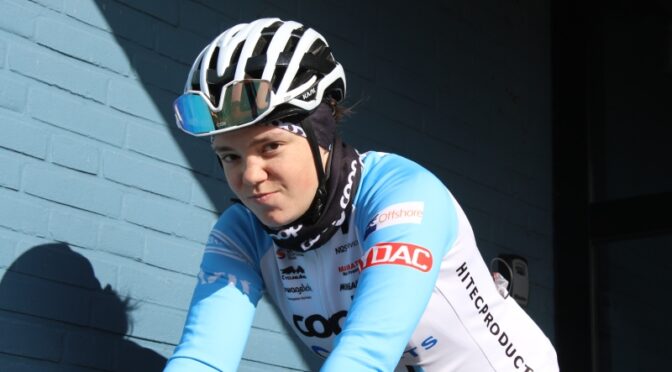 While one part of the team raced in the final stage of the Bretagne Ladies Tour, six other riders started in the Belgium one day race GP Eco-Struct on Saturday. As expected, that race ended in a bunch sprint. With a good result for Team Coop – Hitec Products, as Nora Tveit (photo) managed to finish 7th, while Sylvie Swinkels got 13th. Lena Soland made her international race debut for the team.

“This race was all about positioning”, Nora looks back on the GP Eco-Struct. “We managed to stay in the front for most of the race, which was a key factor I think. The last laps were quite hectic, but Sylvie and I managed to stay in the front for the final lap. I tried to be as far in the front as possible, going into the last corner, and then just went full gas from there. I was able to pass a couple of riders in the last hundred meters and ended with a 7th place, which I am very happy with.”

On Monday Team Coop – Hitec Products announced that Lena Soland joined the team. She would have had her first race in the beginning of June, but plans changed because of a small injury for Christa Riffel. Therefore, Lena already made her debut this weekend. “The course was quite technical, with a lot of small roads, turns and cobblestones”, Lena says. “I am happy with my debut for the team. It was great teamwork during the race, so I am really happy with my strong teammates.”