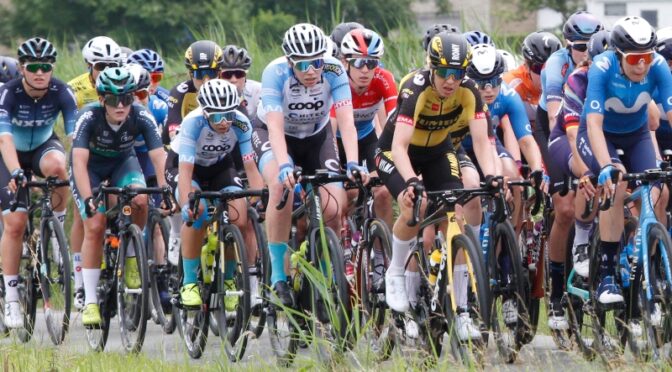 Team Coop – Hitec Products cyclist Mieke Kröger has ended in second place in the general classification of the Baloise Ladies Tour. In the four days stage race that started in the Netherlands and finished in Belgium, the German rider came fourteen seconds short for the overall win. “My shape is good. I am looking forward to the Olympics in Tokyo.”

For Mieke the race was the last one before she heads to Japan, where she will participate in the team pursuit on the track. “The road races itself were hectic, as always”, she looks back on the four days of racing, in which the peloton rode for stage, after a start with a prologue on Thursday and an individual time trial on Saturday evening. “I tried to not lose time at the finishes, which I succeeded in.”

Mieke started good with a fourth place in the 3.8 kilometers long prologue in Utrecht. It were the only kilometers in the Netherlands, as the other three stages and the time trial were organised in Belgium. In time trial she set the second time, being only half of a second less fast as Lisa Klein (Canyon-Sram), who took the win in the time trial and later also in the GC. “I am very pleased with my TT. My goal was to regain confidence in the TT and I am happy I did.”

Happy with the team
In the last stage there were a lot of attacks, but in the end the race ended in a bunch sprint, that was won by former Team Hitec Products riders Lonneke Uneken. Mieke: “Today I of course wanted to try to sneak into the leaders jersey, but Canyon-Sram did a great job controlling the peloton. So I am just happy with the way the team worked today! Pernille, Nora and Martine showed really nice steps into the right direction. It is nice to see them motivated and in good spirits and doing really helpful moves in the races. I am proud of them.”

That for sure wasn’t all, according to Mieke. “Emma is still struggling with her knee injury but she made sure, the spirits were kept high with a few pep talks and in the first stages she was a good road captain”, she says. “Ane surprised me positively. It is a big thing, to be thrown into a Dutch and Belgian stage race without a lot of experience, but she coped very well and showed a lot of professionalism.”

11th place for Nora
Besides the great result for Mieke and the strong performance of the team, Nora Tveit also took a good result in the final stage. After already sprinting to a 20th and 22nd place in the other stages, she now managed to finish in 11th place, her best result so far on international level. Nora joined the team mid-season.