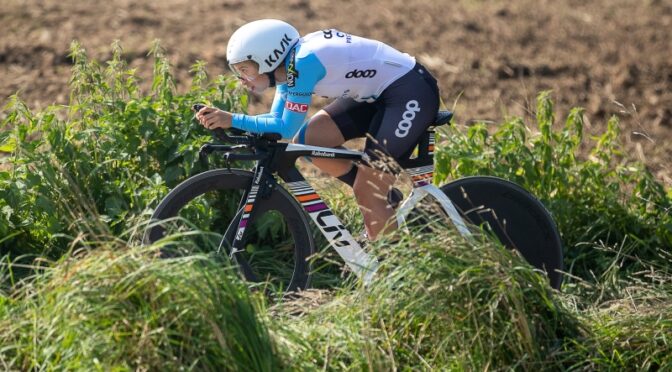 Where one part of the team was participating in the Challenge by La Vuelta, another part raced the Watersley Womens Challenge. This three days UCI stage race in the Netherlands was organised for U23 riders. With a 9th and 10th place in the final stage, Emma Boogaard and Caroline Andersson got the best stage results for the team, while Caroline ended 12th in the GC. “As a team we have learned a lot in these three days”, Emma said afterwards.

At the Tom Dumoulin Park in Sittard, the race started on Friday with a hard stage. Emma (photo top): “It was hectical, with a lot of corners. I crashed in the beginning of the race, when two riders rode away from the bunch. Parkhotel played it smart and controlled the race. As a team we couldn’t beat them. Something we talked about after the race, as every race is one to learn from.”

Caroline looked at it in the same way: “I am very happy with a great achievement for me and the team”, she says. “The first day was a super hard and technical criterium-like road race, which blow the peloton in pieces. Not even the commisaires could keep track of it. But behind the four breakaway riders we were with three Coop – Hitec girls in a twenty riders big group, the remains of the peloton.”

Hard time trial
On Saturday it was time for the individual time trial. Caroline: “It was a very technical course. I rode an okay TT, but lost a bit of time in the difficult corners, still ending in 28th position.” The best result for the team was for Pernille Feldmann. “It was a 12 kilometers long TT with a lot of corners and going up and down the whole time”, Emma tells. “Pernille rode strong and got the 19th place, while I was 23rd. In a time trial it is everyone for themselves, so it was nice to see what everyone’s place was in this field.”

With a very hard stage in the hills from Limburg, the Watersley Womens Classic ended on Sunday. “That last stage was a small version of the Amstel Gold Race”, Caroline says. “We went into a breakaway early in the race and smashed the peloton to pieces. It was a very hard and technical, but fun day. I almost made it all the way but run out of steam a bit on the end and had to settle for a satisfying 10th place on the Queens stage. So close, but still a bit to go.”

‘These days make us stronger’
Emma: “The third day was very heavy, with 1300 altitude meters and going up and down the whole time, with a lot of turns and small roads. The Parkhotel girls started racing almost from the start and together with Pernille I was in the first group immediately. She then had back luck, while Caroline who was really strong jumped to our group, after she was stuck behind a crash.”

In the final the first group also split. “Caroline and I were in the second part, riding for place nine. I surprised myself, winning the sprint from that group. It was nice to race in the Netherland. Most of these streets are familiar to me, as I raced her as a youth rider. It is always nice to be on roads you know, especially to know how far it still is to the finish line, haha. We learned a lot in these three days and this makes us stronger for the next races.”