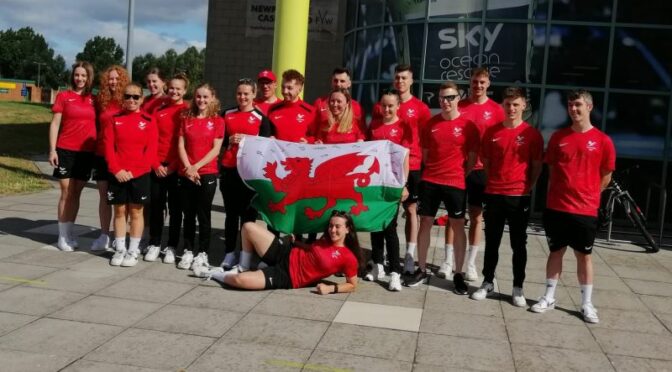 While the team awaits a Scandinavian race program with first the Tour of Uppsala, then the World Tour team time trial and road in Vargarda end last the Tour of Scandinavia, two riders have a different program. Jessica Roberts and Josie Nelson will be competing at the Commonwealth Games, which are organised in Birmingham. For Jessica the event already started, as with Wales she on Friday got fourth on the team pursuit.

“I am really excited to get racing at this year’s Commonwealth Games”, Jessica said about her participation. She is starting in both the track event and the road race. “It’s a home games which makes it even more special. Our main goal is to make it into the medal final in the team pursuit delivering a strong and smooth ride. I am also doing the points race which I hope to be able to perform well in as well.”

A total of 71 countries in the world can compete at the Commonwealth Games, which makes the event bigger than a lot of people from non-Commonwealth countries might realize. “The Commonwealth Games is a multi sport event held every 4 years. For Wales it’s a massive event and is really special to us. I don’t get to race in the Welsh Jersey much, so for me it means a lot to be able to represent Wales at these Games!”

Bring home a medal for Team England
While Jessica is doing the track event and then on Sunday 7 August the road race, Josie is only competing on the road, also starting in the road race. “I expect the race to be fast with lots of attacks”, she looks forward to it. “I will ride my best for the team to hopefully help bring home a medal for Team England! The Commonwealth Games only happens once every 4 years, making it a really prestigious event and with it being a home games, it makes it extra special! I see it as similar to the Olympics, because it is a multi-sport event with the bigger goal of excelling as a nation.”

Proud to wear the jersey
Jessica sees the same: “I love coming together with the whole Welsh team, the atmosphere within the team is always great and we all get on really well. Welsh Cycling put in so much hard work for the Commonwealth Games, so I hope we can have a successful games and do the Welsh jersey proud! I am also doing the road race the week after the track races and I believe we have the potential to win a medal there too. I’m looking forward to chasing those medals over the next 2 weeks!”