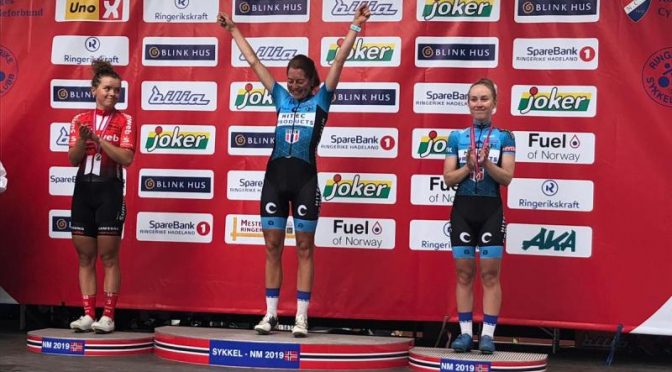 Ingrid Lorvik is the new Norwegian champion. She gave Team Hitec Products – Birk Sport the win in the road race on Sunday, for the fifth year in a row. Ingrid won the race with a solo. Behind her Vita Heine, the winner of the last three years, and Ingvild Gaskjenn were in a chasing group of seven riders. They defended Ingrid’s lead, while Ingvild sprinted to a bronze medal and Vita finished in fifth place.

“This is an important victory for both myself and the team”, Ingrid said after the race. “When we are here, racing with such a big team and these strong riders, I would have had the feeling that we had failed, if we didn’t took the win. On the other hand, there were a lot of competitors this year.”

The team did have to work for the win. Maybe even more than in the past. Ingrid: “The level of women’s cycling has grown bigger and bigger. I never thought that we would have so much strong Norwegian women in a race, like it is now. It makes it even greater to succeed and that we are the strongest team.”

Ingrid’s title was the third Norwegian title for Team Hitec Products – Birk Sport in a week. First Ingvild won the national criterium championships, then Vita became time trial champion and now there was success in the road race.

Lonneke 9th in Holland
In Holland the national championships looked a bit like the world championships, with so many world class riders in the race. Lonneke Uneken did a superb job on Saturday, finishing ninth. She was involved in a very strong lead group in the finale. Lorena Wiebes won, while Marianne Vos, Amy Pieters, Annemiek van Vleuten and Ellen van Dijk came in second to fifth. Those names already say a lot about the high level of the race.

“I am very satisfied with my result”, Lonneke said about her race. “After a leading group was caught, Annemiek van Vleuten attacked. We then came in the lead with a strong group and it was full gas to the finish. I knew it would be possible for me to go with them, but in the final it went very fast. I had to let go a few times, but could also chase back. This was all that was possible for me.”