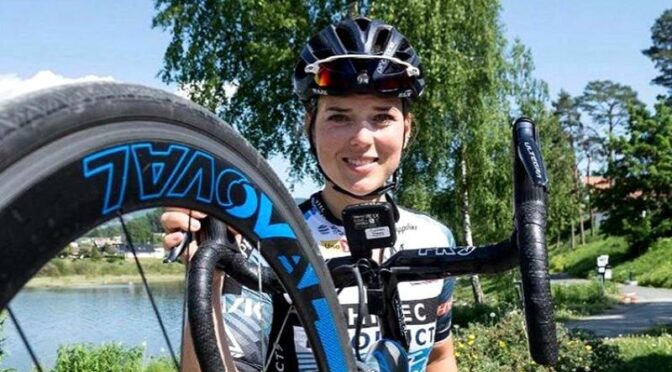 There are not many cyclist who can say they rode for a team more than half of the years the team excists. At least, not when the team already excists for a longer periode. Thea Thorsen can. Team Hitec Products is now on its twelfth year and she rode seven seasons for the team. But how is it now with the 28 years old former cyclist from Norway? We asked her six questions.

Thorsen joined the team in 2012, in a group with riders of who amongst Emma Johansson and rising star Elisa Longo Borghini. During her career she helped the team in winning several races. In the Norwegian time trial championships, Thorsen was two times close to the title. She became second in both 2017 and 2018. Those were her last two seasons as a cyclist.

1. How are you doing and what does your life look like now, since you retired as a cyclist?
I’m doing great! At the moment, with the hole Corona situation, I’m staying a lot home, like everyone else. I started studying again last fall, so my days are filled with home studies towards my last exams before the summer. 2. You were a cyclist for Team Hitec Products in 2012 and 2018. How do you look back at that time?
My seven years with the team gave me a lot! As a young rider the team gave me a great opportunity to race the big international races and to develop as a rider. We had our service course in Belgium (Oudenaarde and Ninove). I usually spent the whole spring there, and it made me love both the spring races and the country.

3. How do you look back at your cycling career in general?
During my years as a cyclist I met a lot of different people that I’m very grateful for. I also look back at a lot of training, traveling and racing. Cycling has given me a lot. I learned so much and it has given me plenty of experience that I can also use in my daily life.

4. Thinking about your time with Team Hitec Products; what is the first thing or moment that pops into your mind?
I have many good memories from my years in Hitec. I really appreciated the spring in Belgium. Staying together with the whole team, racing all those brutal spring races. Also the longer trips to both China and Qatar are something to mention.

5. The team is now in its twelfth year and with that it is the oldest still existing UCI-team. How do you look at that?
The team has always been important for the Norwegian riders, especially the younger ones. Tone and Karl have been, and still are doing a great job, giving a great opportunity to race the international race calender. I think this opportunity is crucial for the development of many young riders in the team.

6. What are your hopes for the future of the team and Scandinavian cycling?
Hopefully the team stays strong after this difficult year! Also I hope they will continue the geat job they are doing, giving the Norwegian and Scandinavian riders the opportunity to race and develop.