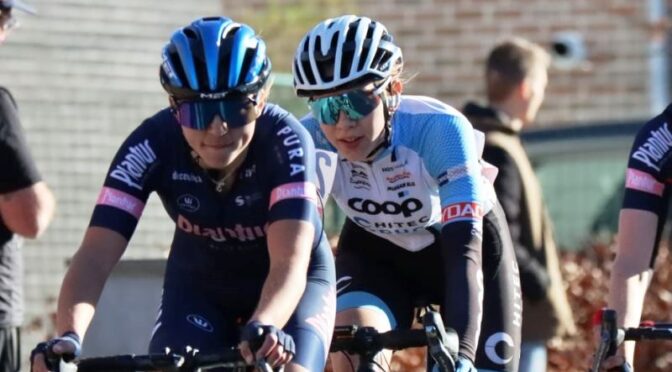 After a weekend without a race, Team Coop – Hitec Products got back into action on Wednesday, racing the Scheldeprijs. The Belgium classic that with the men already for years is known as the ‘un-official world championships for sprinters’, was organised for the women for the second time. As last year, Lorena Wiebes won the bunch sprint. Ingvild Gaskjenn sprinted to the 16th place.

The Scheldeprijs was very hectic, with a lot of crashes during the race. “It was a super fast race and the wind didn’t split the bunch like we thought it might”, Josie Nelson looks back on it. “There was cobbles on the final laps, but they also weren’t bad enough to split the bunch either, so it was still a pretty big group on the final lap. It made the last 20 kilometers really hectic with everyone trying to be at the front.”

That fight for positions also caused a big crash within the last 5 kilometers of the 138 kilometers long race. Josie was focussing on the sprint of Ingvild. “I was leading Ingvild out so kept her at the front for the final lap, but as it was just me it was really hard. I dropped her off on Lorena Wiebes’ wheel with about 2 kilometers to go, but unfortunately as a conti team we get pushed about by the bigger teams, so she was forced off the wheel. She sprinted to 16th and I managed to get 30th.”