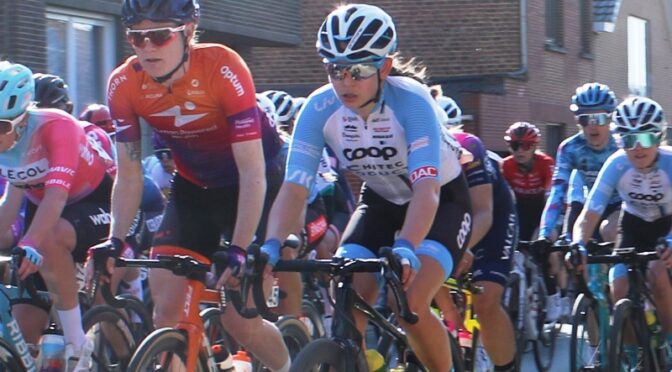 A hectic final in the Exterioo Classic Brugge – De Panne has resulted in some nice results for Team Coop – Hitec Products. After already have been in the attack for about 70 kilometers, Nicole Steigenga sprinted to an 11th place in the Women’s World Tour race. Sylvie Swinkels finished 23rd, getting her first ever UCI-points in a race on the highest level. “We did all we could to get a good result in this hectic final.”

The wind is a lot of times a big factor in the Belgium race that starts in Brugge and finishes in De Panne, but this time it was not. “It looked a bit like there were no echelons coming, so I wanted to go for the early break”, Nicole (photo top) looks back on the beginning of the race. She first went solo and then was part of a small leading group. “That was a bit disappointing, because we first were with four and that cost too much energy. I thought they would let us go but the gap stayed about one minute the whole time. Then two more girls joined and things got a little better, but we still didn’t really got more space, so it was a bit of a waste of energy.”

Saving energy
In the meantime, the other riders of the team could save energy in the peloton. “It went well from the start”, Sylvie tells about her race. “In the first hour I spared myself and made sure I drank and ate enough. Then I rode to the front and stayed there for almost the entire race. That is also why Nicole and I were in front of the decisive crash in the final. We then tried everything to finish both as good as possible. During the race we communicated well and tried to stay together.”

Hectic final
Around 80 kilometers into the race, Nicole’s attack was over. She also looks back on the final; “We then made a somewhat stupid mistake, by riding too far back in the peloton on the Moeren. We didn’t think it was windy, but the peloton did break. Fortunately we were able to come back. The final was quite hectic after that. There were two crashes, one that I was just before and the other I could get around. Then Sylvie and I tried to do the best possible sprint.”