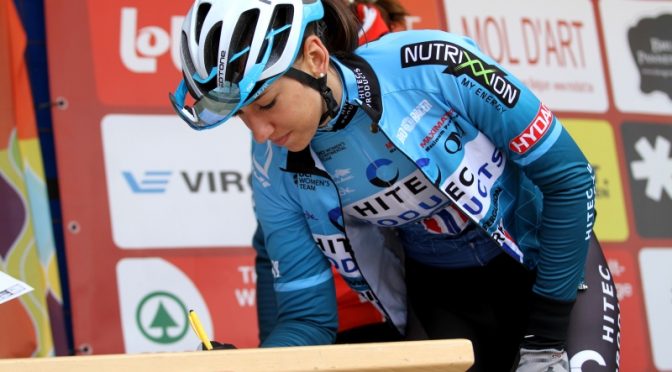 The new season has started and with that, a lot of riders have made their debut for their new teams. At Team Hitec Products – Birk Sport there is no difference. We have four new riders compared to the team of 2019. In the upcoming weeks we will introduce them to you through some interview. Starting with Greta Richioud. “I immidiately had the idea I was entering a big family, where everyone is nice to each other.”

After five years with FDJ Nouvelle Aquitaine Futuroscope, 23 years old French rider Greta Richioud decided it was time for a change. “I needed to see something else and wanted to have more responsibility in races”, she tells. “To discover another way of racing and to keep making progression. It is great that I could join Team Hitec Products – Birk Sport and both the staff and riders gave me a warm welcome. I felt home from te start.”

Collective power
A good start it was. Greta was part of the team that won a stage and the general classification of the Dubai Women’s Tour with Lucy van der Haar. “That was incredible. Everyone contributed to the win and it was a great feeling of collective power! For myself there was just one disappointment and that was my puncture in the third stage, with only six kilometers to the finish. But that is what happens in racing and the team was on top of it, to change my wheel in less than ten seconds!” From warm weather to cold weather, Greta also raced the Omloop Het Nieuwsblad and Omloop van het Hageland last weekend. It wasn’t the weekend she hoped for, having a bad day on Saturday and a crash on Sunday. “But they were only the first two races of the season in Europe, so I have to put things into perspective and learn from my mistakes. These races are always better if you have more experience. I am ready to start fighting for the victory again with the team in the next races.”

Greta is an all-round cyclist and with that, she hopes to show herself this year. “I prefer the hilly courses, races that are quite difficult, with a small sprint uphill”, she tells. “I hope I can raise my arms on the finish line this year, maybe in such a race. But I also want to contribute to the success of the team and help the girls of the team to win.”

English
Another goal of Greta, who next to her cycling career works for the national police of France, doesn’t have a lot to do with cycling. It is however something she can work on quite fast, now she is in a foreign team. “I want to try to speak good English. It is difficult, but I still learn new things every day.” At least Greta already knows a bit about the Norwegian culture; “I live in the Ardeche in a magnificent place where wine, chocolate and chestnut cream are the specialties. But I also really like the Norwegian salmon. It’s my favourite meal.”