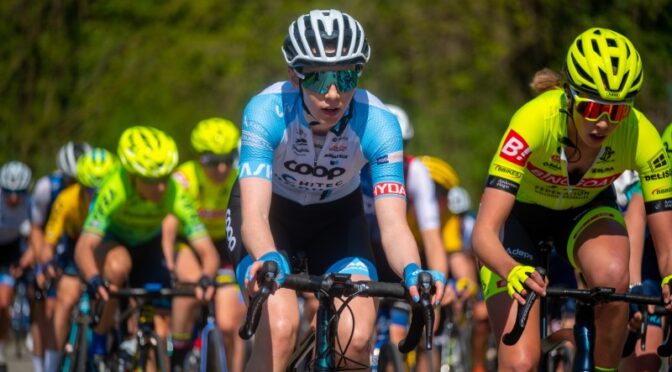 The past days have been busy for Team Coop – Hitec Products. Were one part of the team were racing in Germany for already three days at that moment, an other group of riders started in the Ride London on Friday. A special race for the team, but for sure for Josie Nelson and Jessica Roberts, as they were racing in their own country. We got away with some good results, a day with Josie in the red jersey of best British rider and good motivation.

Competing against the best riders in the world, sometimes means you are not on the top of the results. However, Team Coop – Hitec Products did all they could and in the second stage, Josie got a 19th spot, ending 23rd in the GC after three days. “It was really nice to race in my home country and the crowds were amazing”, she looks back. “The first two stages were pretty calm for the first 40 kilometres, until there was a few attacks. The last 10 kilometres are always crazy fast and it’s so easy to get swamped and pushed to the back of the bunch especially against all the big teams.”

On Sunday the Women’s World Tour race had it its finish in the city centre of London. The pace was high during that last day. “The final stage was very fast, like a criterium race, and so the last lap it was even harder to stay up near the front and to sprint against such a high level of riders. It was a great experience to race in the centre of London and it felt really special to wear the Best British Rider jersey!”

‘Had a lot of fun’
After some difficult years, Jessica Roberts is back in the peloton with Team Coop – Hitec Products and getting to her level from before. She also looked back with great pleasure: “I haven’t raced in the UK for a long time now, so it was really special to race in front of a home crowd again. I had a lot of fun the last three days and felt better each day. Slowly each race I’m starting to feel my legs coming back, which is nice. I am looking forward to the Womens Tour in a week!”