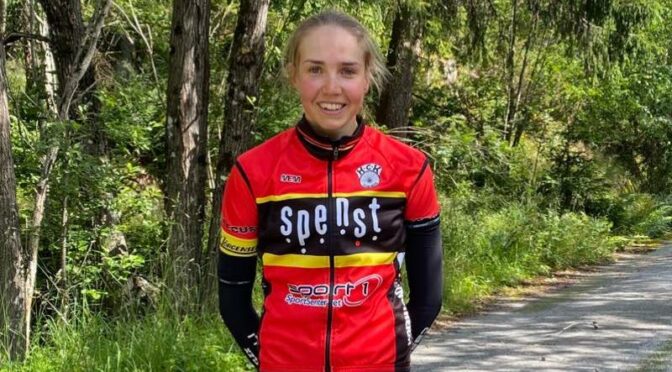 This year Ann Helen Olsen (22) became the Norwegian U23 champion, taking a fifth place in the elite race, just one place behind Team Hitec Products rider Vita Heine. With that, she again showed good form. Next season Anne Helen also hopes to do that in the Team Hitec Products jersey. Time to get to know her, as unlike other young girls there are not many results to find from her. “For many years I played football and did track and field.”

Born and raised in Halden, a small city on the Swedish border south of Oslo, Ann Helen started cycling later than most of the girls that race for the team in 2021. She however has quite a sports career behind her already. “From a young age, my parents have always supported and encouraged me to engage in sports”, she tells. Football and athletics were her sports. “I actually showed a talent for shot put. However, I went with football and I was 100 percent committed, and for a couple of seasons I played in the first division.” Still, it wouldn’t be the sport that Anne Helen kept doing. “It was a coincidence that I started with cycling. During the summer break from football, I cycled and ran as alternative training, and I joined my dad on some long cycling sessions. In the beginning I experienced it as long, tough and unfamiliar to my body. But after a while I gradually got a better feeling and wanted to focus a bit more on cycling. I then joined the youth group at Halden cycling club (HCK) for some training sessions and I had good help from Silje Mathisen´s dad in the beginning of my cycling career.”

Higher physical demands
It was the start of the cycling career of Ann Helen, who next to cycling also studies to become a teacher in the future. “As a result, I quit playing football and went all in on cycling. I have never regretted this choice. What I like best about cycling is that it is a combination of physical challenges, speed and excitement. In addition, I get the opportunity to train a lot outdoors and in new surroundings. The biggest difference with football I think, is that cycling has higher physical demands in order to reach the top. Besides that, it is a sport that offers excitement in a completely different way, and you must be able to constantly focus and concentrate for many hours.”

Norwegian championships
A high point in her career so far, for sure was her result at the Norwegian championships in August of this year. “The evening before the race we agreed on the tactics”, Ann Helen looks back. “The goal was to get in the right break and be offensive, ‘dare to win’ and take chances. We thought that an established break was the place to be. Together with Vibeke Lystad and Vita Heine, I catched up with the break group. I decided to be a good contributor in the break and thought this was a day where anything could happen. In the final, I took the chance and tried to break away from the group 900 meters before the finish line. I got a comfortable distance between me and the group, but the others caught up to me when there were 200 meters left.”

It still got Ann Helen the U23 title and she showed herself again. The result is a contract for next season with Team Hitec Products. Something she is looking forward to. “I am really looking forward to team up with the talented girls of Team Hitec Products in 2021 and to learn from them. Hopefully we can achieve some good results together. I have only cycled a few international races before, so it will be exciting to meet and compete with many of the best cyclists in the world next season.”

Ladies Tour of Norway
But if it comes to a dream race to compete in next season, or in the future, Ann Helen looks for it a lot closer by; “Since I am from Halden, it would be super awesome to participate in the Ladies Tour of Norway. I remember watching the tour when I was a football player, and I thought it looked insanely dangerous, but also very cool. They rode so fast and close to each other!” Now she is one of those riders in the peloton herself and looking forward to a new year of racing. “In the coming season, I hope to learn a lot by riding with the girls of Team Hitec Products, to compete more internationally and to become even tougher physically.”

Earlier we also talked with Martine Gjøs, Anne Dorthe Ysland and Caroline Andersson. Click on their names to read the interviews.