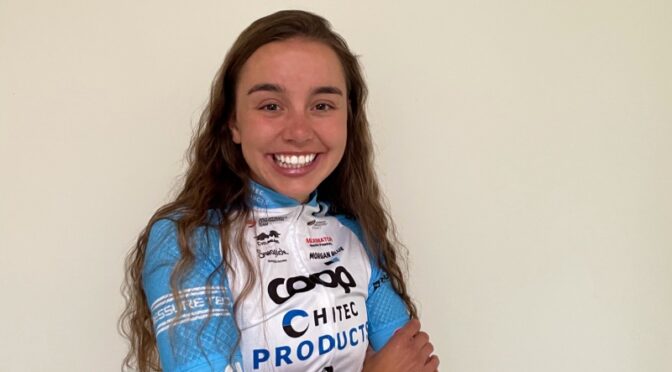 In the first women’s edition of the Scheldeprijs, a Belgium race that the men race for already the 109th time, Team Coop – Hitec Products has showed itself well. After a fast and hectic day of racing, the race ended in bunch sprint. Lorena Wiebes (DSM) won, while Amalie Lutro (photo) sprinted to a good 16th place in the strong field. Both Anne Dorthe Ysland and Emma Boogaard, who made her debut for the team, finished in the peloton.

“It was a hectic race”, Amalie looked back after the finish. With her 21 years, she was the ‘oldest’ of the starting riders of the team.  “We were expecting a hard day considering all the cross-wind. The bunch split several times, but it always came back together. When we entered the local laps the speed in the peloton got higher, and the course more technical. I think that was an advantage for everyone in the team. We managed to stay together, communicate and help each other towards the last kilometer. From there on the only goal was to stay as far in front as possible and try to keep the position all the way to the finish line.”

Debut of Emma
Emma made her debut for the team, after the announcement on Tuesday that she joins Team Coop – Hitec Products with immediate effect. “I really enjoyed racing again, despite that it was super cold”, she said after the finish. “Racing on the highest level is very different, but also a lot more fun. It was great to race with the girls. We had good communication, which is also very new to me, and I immediately felt part of the team.”

A lot of fun
For Amalie, the debut of her new team mate felt the same; “It was so much fun to race with Emma for the first time today! She is so good in the peloton and an even better teamie. I think we will have a lot of fun this year in the team and also Anne Dorthe and I cooperate better and better together for every race. Mari was a bit more unlucky today, but her time will come sometime in the future, I am sure of it! All in all it was a good day.”