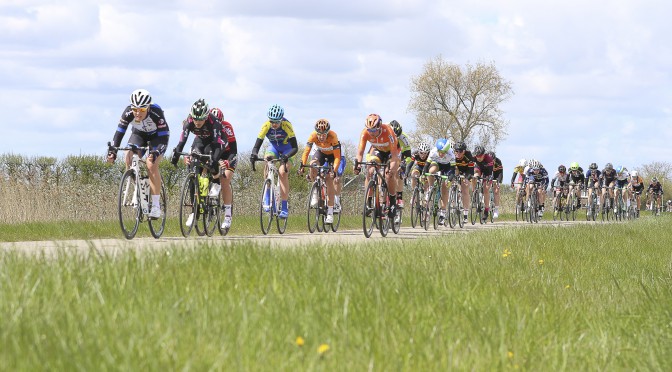 Saturday our girls raced in the Netherlands at the Omloop van the Borsele. Already early in the race the bunch split into several groups in the tough winds and high speed.

The bunch regrouped and split several times until close to the final a group of 22 got clear including Lauren. The sprint was won by Barbara Guarischi (Canyon Sram) ahead of Floortje Makcaij (Liv PLantur) and Christine Majerus (Boels Dolman). Lauren was sitting on the winners’ wheel in the final when she found herself with bike trouble after touching wheels. She crossed the line in 21st place.

Sunday the girls lined up for the Dwaars door de Westhoek in Belgium. Also this day the peloton split early in the wind, rain and cold. A group of 27 riders formed in the front where Tatiana found herself without teammates. Rabobank had all six riders in the front and pushed the pace making it tough for our girls in the second group to get back. On the final climb a group of nine got clear, attacking each other towards the final. In the sprint Christine Majerus (Boels Dolmans) made no mistakes and won ahead of Elena Cecchini (Canyon Sram) and Emma Johansson (Wiggle). Tatiana finished as our best rider in the second group after just missing out when the winning group got clear.