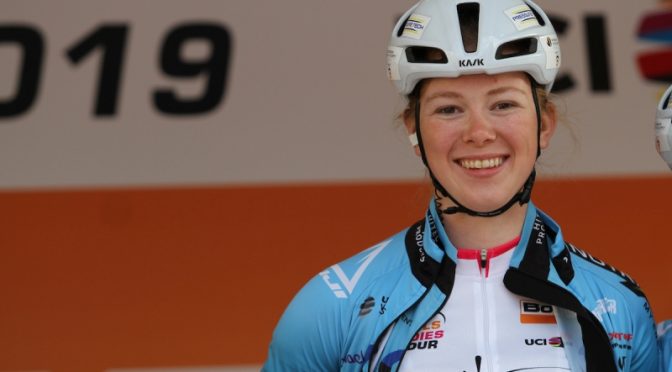 For Lonneke Uneken it was a good week in the Boels Ladies Tour. De Dutch rider of Team Hitec Products – Birk Sport was able to finish in the top-10 in three different stages and also took a twelfth place in a stage. In the end she finished 21st in the general classification of the Dutch World Tour race. “It was a rough week, but I look back very satisfied on my first Boels Ladies Tour.”

Without a hilly stage in the Limburg province, this year’s Boels Ladies Tour was a bit different. “And as there also was no long time trial, but a short prologue, I wanted to ride a good classification”, Lonneke tells. “I first focused on that prologue and then made a plan for the following stages. After a 26th place in the prologue, the differences were still small.”

But then the race only started. Even tough two times a little group stayed in front, there was a bunch sprint in all stages. “The level of racing was very high and the pace was high all days. I had to be focused on the moments that the favourites attacked, so I could join them. Looking back, that went well all days. With that I was able to get top-10 places in the first, second and fourth stage.”

Ten kilometers too long
On the final day, Lonneke lost some time. “As I was the number two in the youth classification, I rode the last two stages in the white jersey. In the end, the race was ten kilometers too long for me. On the last climb, I had to let go the first group and came over the finish in 25th position, at a bit more than a minute from the first riders. However, as I said, I am very satisfied.”