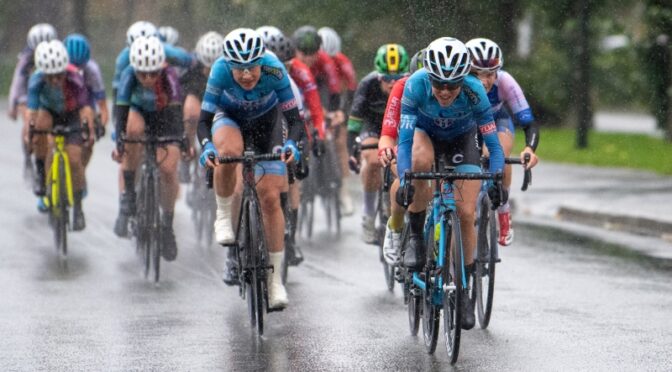 From last Thursday to Sunday, there were four races in Norway. After those four days of racing, Team Hitec Products ended up with two victories, both for Vita Heine. She won the individual time trial of the Norges Cup on Saturday with a big advantage. A day later she finished of very good teamwork with a solo win in the road race. On Saturday Ingrid Lorvik was already close to a win as well, finishing second at the Norwegian criterium championships.

“It was a wet and chilly weekend”, Vita looks back on Monday. “Ingrid was the only rider of us who participated in the team time trial for club teams and regional teams on Thursday. The day after however, we were on the start of the criterium with more riders. That was quite the day, with pouring rain a strong wind. Ingrid showed courage by being active and following an attack. She was rewarded with the second place.”

For Vita the two weekend days were the most important days. Starting with the time trial on Saturday. Where Anne Dorthe Ysland, who will join Team Hitec Products in 2021, won the junior race, Vita was a class apart in the elite women category. With her time of 22.07 minutes, she was over one and a half minute faster than Mie Bjørndal Ottestad, who had the second time. Behind her the time gaps were a lot smaller and Ingrid this time ended in ninth place.

Great team performance
On Sunday the riders did a road race of 104 kilometers. “We had to race six laps, with many short climbs in it”, Vita tells about the race. “The longest climb was around two kilometers and with a 5% average gradient. We knew we were one of the strongest riders physically and the team made a tactic to make the race very hard. From the first hill we pushed everything we had and the peloton was split in pieces already. We kept riding hard on the hills and with 23 kilometer to go nobody could follow me anymore. I won with almost one minute advantage, thanks to a great team performance.”