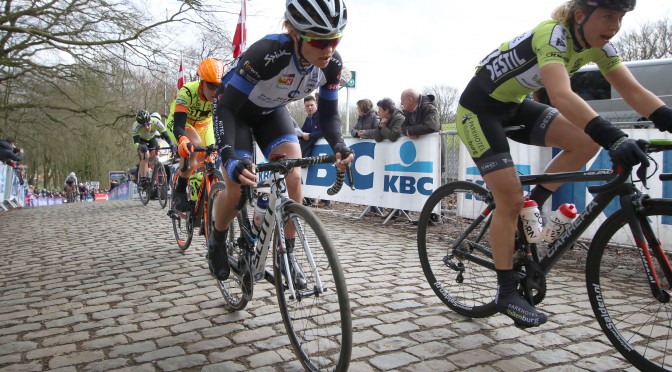 This Sunday Team Hitec Products lined up for Gent-Wevelgem (WWT) with goal of another top ten result. The race of 114km included two times the cobbled climbs Kemmelberg & Monteberg and once the Baneberg. Although the weather was nice, the winds were strong and already early in the race the peloton split in two because of it.

At 50km the first climb came and over the top a selection of 25 riders got clear, none of our Hitec girls. Emilie was the closest over the top and at one point only 10 seconds behind the leaders. The front group rode strong and with a lot of teams represented, the group behind did not get organized to chase and the gap grew into several minutes. With the third group Lauren was able to advance up to Emilie and together with some other teams they worked to close the gap down to 25seconds.

In the last climbs the leaders increased the tempo and made it difficult for those behind to catch up. In the front Boels-Dolmans had no less than six riders, playing their numbers right with attack after attack. Eventually Chantal Blaak got away and won the race ahead of Lisa Brennauer (Canyon-Sram) and Lucinda Brand (Rabobank-Liv). Chantal Blaak is new leader of the World Tour, Lauren is our best rider in 13th place overall.

Although no top ten result for us in this race, the girls are showing strength which will turn into great results again. Next up is the fifth race in the WWT, Ronde van Vlaanderen on the 3rd of April.