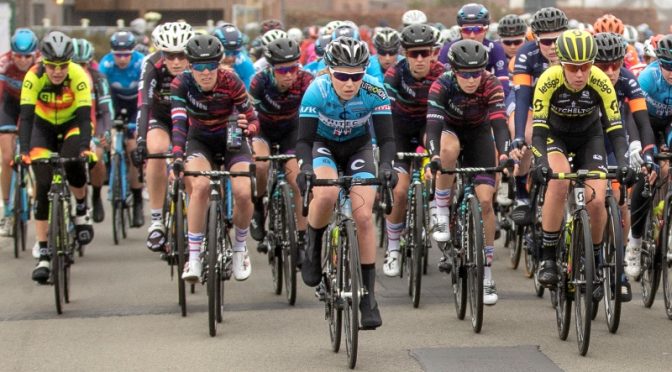 Three days after Gent-Wevelgem and four days before the Tour of Flanders, the peloton raced another big Belgium race on Wednesday. In Dwars door Vlaanderen Dutch rider Ellen van Dijk won solo, after escaping from a lead group of eleven riders. In the bunch sprint Lucy Garner sprinted to the eighteenth place, while Ingvild Gaskjenn was involved in a lead group during the race.

After some bad luck in Gent-Wevelgem, we now saw most riders of Team Hitec Products – Birk Sport in front of the peloton. Something that a lot of people could see, as the race was live streamed on Facebook from start to finish. A great initiative for women’s cycling from Proximus, which will also show the Tour of Flanders next Sunday.

“I think our riders showed that they are in good shape”, sports director Tone Hatteland Lima said after the race. “However, we do need some luck. We again had bad luck today on a wrong moment. Both Lonneke and Chanella punctured just before the Kluisberg. We just gave Lonneke a wheel, when we heard our team name on the radio again.”

But there were also good things in this race. “It was good to see Ingvild, who is one of our young Norwegian riders, attacking during the race. They didn’t get much space, but she tried well. And during the part with attacks, most of our riders were in front of the peloton. That was good to see too.”

Tour of Flanders
Next up is the Tour of Flanders. That race is a level higher again and that makes it even harder, but Hatteland Lima does have some good hopes. “We are in a good shape, but we need to have some more luck. These World Tour races might be a little bit too tough yet for some riders, but if Vita succeeds with her positioning she can do a good race. And Marta is also a rider that can do well in that race. Maybe we can surprise.”