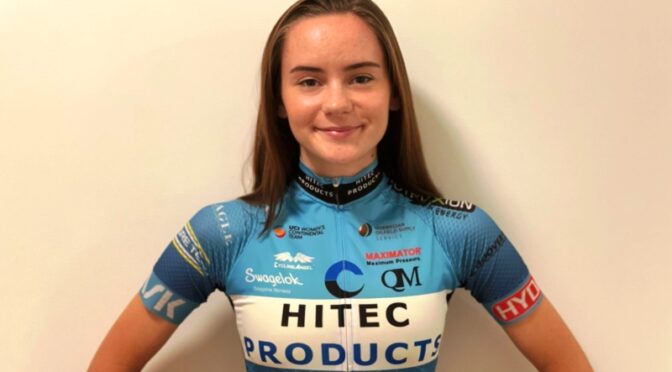 One week after announcing their team roster for 2021, Team Hitec Products has decided to add an extra rider to their squad. The 19 years old Norwegian talent Mari Mohr also joins the team next season. As a junior Mohr won the Norwegian road race cup in 2019, with a total of five race wins. She also became national champion cyclocross last year. With her addition, Team Hitec Products now has twelve riders for 2021, ten of whom are under the age of 23.

“As a team we want to develop talented riders from Norway and we now got a chance to add an extra rider to our team”, says Karl Lima, team manager at Team Hitec Products. “Then you don’t hesitate. We were following Mari already for a longer time. For first year senior riders this was a difficult year. But despite that we for example saw her doing well at the national criterium championships, in which she ended in sixth place. I am very happy she joins our team now and that with her, we now have eight Norwegian talents in our group.”

Mohr is familiar with both the team and main sponsor Hitec Products, as she is a local rider from Stavanger. She grew up racing with her future teammates Amalie Lutro and Pernille Feldmann, at the local ‘talent factory’ Stavanger Cycle Club. “Team Hitec Products is a team that I have admired ever since I was a kid”, she says. “It has always been a goal to someday sign for the team. Team Hitec Products is, and has been for many years, very important for Norwegian cycling because it gives Norwegian women the opportunity to develop and become strong riders internationally.”

Development
Starting as a cyclist on the age of six, in an MTB event, Mohr is already experienced if it comes to racing. “I have three older siblings, who were all cycling, so I have been participating in races from an early age. This season was my first year in the elite category, so I am looking forward to develop as an international rider, learning from the more experienced girls. My goal for next seasons is to gain as much experience as I can and to work together with my teammates to achieve the best possible results for the team.”