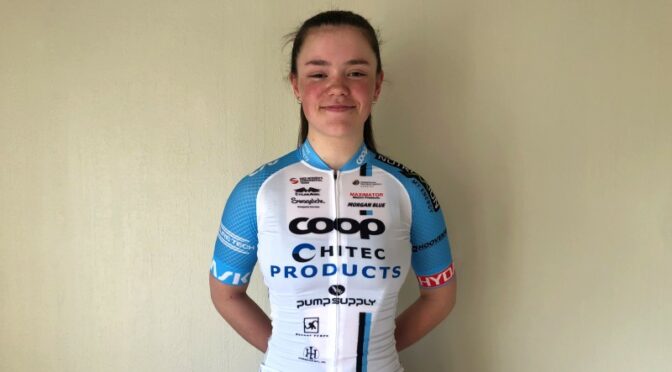 With Nora Tveit, Team Coop – Hitec Products has signed an extra rider for the current cycling season. The 18 years young Norwegian rider from Stavanger will make her debut for the team in the Belgium one day race GP Eco-Struct, on Saturday May 8. “I want to get as much experience as I can, helping the team achieve the best possible results.”

Nora, who is in her last year of high-school at the moment, started cycling at a young age. “Ever since I can remember, I have wanted to be a professional cyclist”, she says. “So signing with Team Coop – Hitec Products is something I am really excited about. In the last four years, I have been actively competing in track races. This is something I enjoy very much and I am happy that Team Coop – Hitec Products gives me the chance to race both on the road and on the track.”

Familiar faces
Even though she is new in the team, Nora won’t join a group where she still has to get to know everyone. “Since the team is based in Norway, I already know a lot of the girls on the team. I think this will help make the transition to the professional side of cycling a lot easier and less stressful. In the past I have competed against them many times, so it will be exiting to ride with those girls instead of against them.”

Besides that, Nora already followed Team Coop – Hitec Products for years. “I think it’s really important for cycling in Norway that we have a UCI women’s team. Team Coop – Hitec Products goes in front as an example, a pioneer, and I hope for the sake of the sport that more teams will follow in their footsteps. I think it’s really important for Norwegian girls to be able to have a team to look up to, and to see that it is possible to become a pro, even though Norway isn’t really a ‘cycling nation’.”

Learning
Because of Covid, Nora hasn’t been able to race in 2021 yet, as the national races so far were cancelled. Nora did however became Norwegian criterium champion two times in the past and won several other races. This season will be about learning. “My main focus is to get to know the dynamics of the elite peloton. At this moment, I am not quite sure what to expect, especially since I haven’t raced internationally in a while because of covid. But I am looking forward to finding out where the level is at. For the rest of the year, I plan to develop myself as a rider as much as possible.”