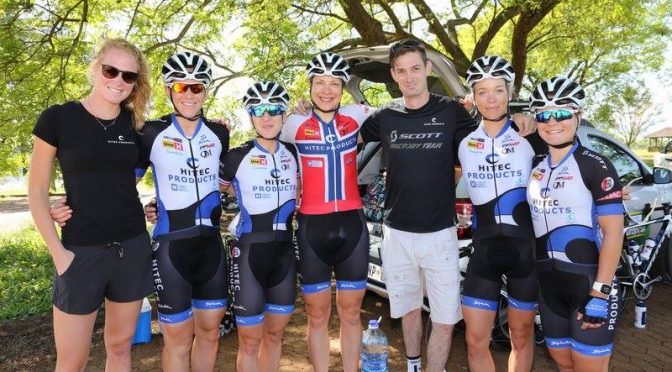 Our team has been in South Africa and raced three one day races with great success! Ahead of the week the girls had ambitious goals and aimed to take one victory and podium’s. Already on the first day of racing the goal was achieved as Vita won the first race in the KZN Summer Series with Charlotte in third. The next day Vita followed up by taking a second victory while Charlotte crowned the team’s performance with a win in the third race. A superb way to end the season. The team for the week: Simona, Cecilie, Vita, Charlotte & Emilie with the support of Geerike and Steven. This first race was a tough one with 2000m of climbing in the 100k stage. 30km into the stage a 19-rider group formed, from this group another 7 got clear including Vita. Charlotte later bridged up to them making it 8 rider group. With 10km to go Margarita Garcia (Bizkaia Durango) attacked, when her advantage was 30 seconds, Vita jumped and bridged up to Garcia. The duo rode together until the final km, Garcia attacked, Vita then countered and managed to stay clear until the finish to take the victory. In the group behind Charlotte managed to win the sprint for third.

In the next race the following day the riders saw another hilly route. From the start, there were several attacks. Our team did a strong job covering and counterattack the attempts before a mix of five, including Vita, was let go at 46km. At 97km the group entered a 4.5km uphill gravel section. Vita put pressure on the group, at the end of the section the group was reduced to three. Close to the finish Vita made one last successful move and was able to repeat her win from the first day, making it her 7th win this season. The last race of the week, the 947 Telkom Cycle Challenge in Johannesburg, had some climbing but less than the previous two. Our girls were not ready to take it easy quite yet and their plan was to attack to make the other teams work hard as well. As the peloton reached the final 30km it was all together and the attacks increased. Going up the Cedar Road the decisive group finally broke clear, Charlotte was our rider to follow the move. In the final sprint, Charlotte proved the strongest and could celebrate a great victory to end both her and the teams season with.