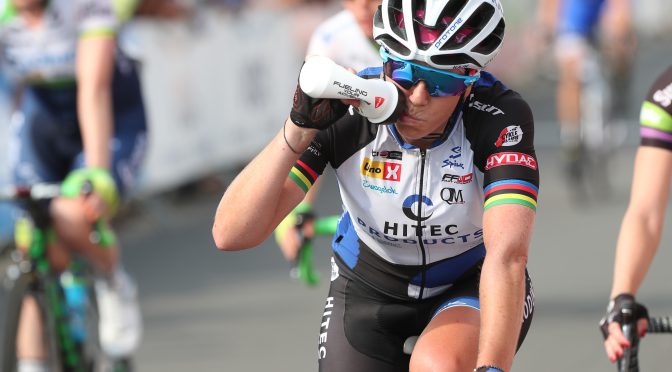 This past week our team raced the Boels Ladies tour, a six day stage race offering a strong peloton, challenging courses and tough racing . A solid preparation for the World Championships in Qatar later this year.

Stage one offered flat roads, but the expected winds were missing. As always a few breakaway attempts from the start with Minke Wan Dongen (Swabo Ladies) as the one to succeed. She was later joined by Kasia Niewiadoma (Rabo Liv) whereas the duo gained up to five minutes. Our girls started to chase down the duo together with peloton and with 10km to go it was all together. The final was a hectic one, Emilie got good help from her teammates towards the finish and was able to sprint to a solid 6th. The stage was won by Amalie Dideriksen (Boels Dolmans).

Stage two was a 24.6km team time trial where our girls found a good rhythm to finish 8th. Boels Dolmans won the stage.

Stage three saw some climbs and the peloton put on some hard racing with attacks and high speed. A few riders got a gap, but as the pressure was high over the climbs the riders in front was caught and the peloton split. With 30km to go the front was narrowed down to 30 riders. Attacks after attacks made the group smaller and eventually a group of 14 was going to the finish. Tatiana raced strong to make the selection, in the uphill finish she crossed the line in 14th place. The stage was won by Kasia Niewiadoma (RaboLiv).

Stage four was back onto flat and narrow roads with crosswinds. A lot of attacks in the start of the race caused for a hectic beginning. A group of 14 riders eventually established of the front including our Emilie and Simona. The group worked well together and increased the lead while Boels Dolmans controlled in the peloton. In the final it came down to a sprint between the 14 riders. Emilie got good help from Simona, but was hit by another rider and her wheel broke. Emilie still finished 9th with Simona in 10th. The stage was won by Sarah Roy (Orica) with Norwegian junior, and 2017 Hitec rider, Susanne Andersen in an impressive 3rd.

On stage five Thea made the breakaway of the day together with two riders. The trio had gained over a minute advantage going into the local laps, but was caught with just a few km to go as the peloton wanted a sprint. The stage was won by Lisa Brennauer (CanyonSram). Emilie finished as our best rider in 11th place.

Last stage offered climbing throughout the stage with a final of four local laps, including the Cauberg. Rain poured down to make the stage even more challenging.  A group of three riders gained an advantage during the stage but was swallowed up on the local laps. The peloton split into several groups and going up the Cauberg last time a group of around 19 riders contested for the win. Niewiadoma won her second stage of the week. Tatiana Guderzo finished as our best rider from second group in 24th place with a 19th overall.

A solid week of racing for the team in Holland, next up is the Lotto Belgium Tour starting already Tuesday.