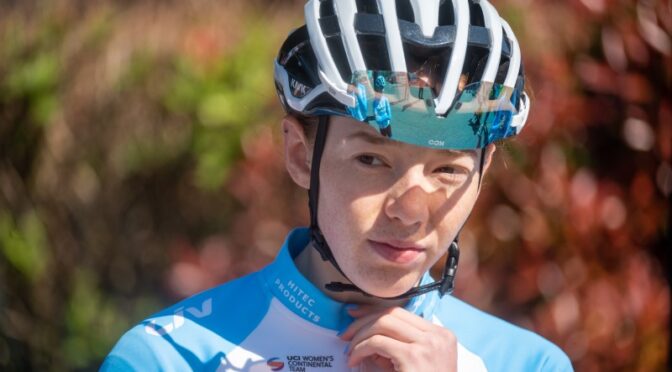 With a second place for Josie Nelson (photo) on the second and final stage, after a late attack of Nicole Steigenga, Team Coop – Hitec Product has shown itself good in the Belgium two-days stage race AG Tour de la Semois. Both days it was a hard final, with small groups racing for the win. Josie ended 9th in the general classification of the race. The same six riders of the team start in the GP d’Isbergues on Sunday.

“Yesterday’s race was fairly calm until the two local laps at 30 kilometers to go where attacks went up the climb”, Josie looks back at the race. “My legs were feeling pretty stiff so after reacting to the attack, I couldn’t quite keep up with the six of them and so I finished in the bunch. Today was a very wet race but, despite the cold, I felt a lot better and was confident for the uphill finish. Nicole attacked with one other girl, with 20 kilometers to go, but unfortunately they were caught just over 5 kilometers to the finish. There was another attack 3 kilometers to go, but we caught her inside the last 500 meters to go and I was second in the sprint.”

It was indeed Nicole, who together with Elise Uijen of Team DSM was in the attack during the second stage on Saturday. “We did get a nice lead, but on the final climb of about one kilometer with a 9% average, we were taken back just before the top. It took some effort, but I was able to keep up with the group. I was really exhausted, but Josie rode a very strong last few kilometers. After a short descent the finish went uphill again. Josie stayed in the wheel of Lorena Wiebes very well, when there was an attack of GC leader Mischa Bredewold, that DSM had to chase. “

Going for the attack
With that, the plan of the team for the day did succeed in a way, even though there was the hope to stay away with an attack. Nicole: “Today we wanted to go for the attack because we were around a minute behind in the standings. But now Josie did also really well to finish second behind Wiebes, even being close to her at the finish. Both days were heavy in the final of the stage, with a course that was going up and down all the time. But with Josie, Stine and me we did have three riders at the front also yesterday.”