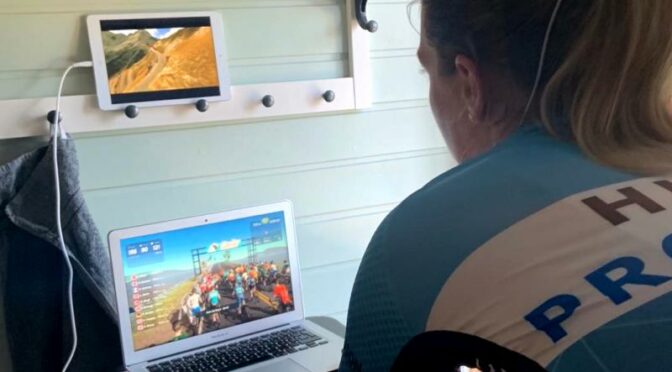 In the past three days, Team Hitec Products – Birk Sport participated in the V-Women’s Tour. Lucy van der Haar, Mieke Kröger and Julie Meyer Solvang raced for the team. They started on Wednesday with a classic stage, then raced a stage with a hard hill top finish on Thursday and ended on Friday with a criterium. However the team wasn’t able to get a top result, the riders do look back on some fun and hard days of virtual racing.

“Virtual racing was a fun new way of racing”, Julie looks back. “The first stage was all about learning. I knew it would be a tough start, but I didn’t expect a 10 minute long sprint! It felt like a criterium. The second stage was a lot better. Unfortunately I did a beginners fail and didn’t drink enough during the stage. I finished the stage but didn’t start the day after. I didn’t get any good results, but I was pushing limits and for me that was the goal.”

Nervous
Event hough there were no race numbers involved, Mieke did feel the excitement of a ‘normal’ race. “Before the first stage I was a little nervous, because I have never raced virtually before”, she explains. “So the ride was pretty unsteady, which became better the next stages. But it was hard for me to push my limits, since the time of day would normally be the time I start to calm down. And I realized quickly, that there was no chance for me to follow on any climb. The resistance became that high that I could hardly turn the pedals.”

But Mieke gave the best she could. “Riding in the bunch is fun. It is fast and you feel the power of the peloton, riding on your own instead feels like you have a constant headwind on +2 % gradient. And getting dropped from the bunch happens quickly, even if it is not because of physical fatigue. One small gap and there is no chance to catch back up.” It shows that virtual racing is maybe even more difficult than real racing.

For most riders it was a home race, as they raced from inside their houses. But for Lucy the race was even a bit more a home race, as the Women’s Tour is of course a British race. “It’s been a good experience for me”, she tells. “I’ve never done this kind of racing before but I knew it was going to be tough. And it was! Having to put down a lot of watts for an hour definitely took it out of your legs after each stage. It’s quite like a TT effort.”

Looking forward to racing outside
Looking back, all three riders are happy that they got the chance to race the V-Women’s Tour. “I am thankful for this experience, but I do prefer normal races”, Mieke is honest about it. Lucy for sure saw that the three days will help her: “These kind of efforts will definitely help you get stronger and prepare us for when the road racing kicks off again.” And talking about that road season, Julie looks forward to that as well: “Although it was fun riding this event, I really look forward to start racing outside! But I will for sure do a virtual training or race again!”