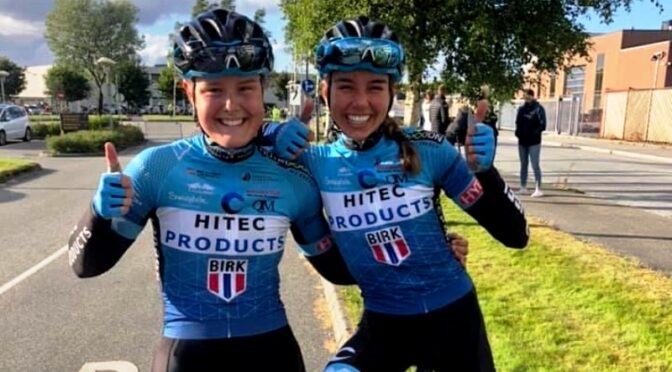 Team Hitec Products has re-signed with four of their Norwegian talents. Ingvild Gaskjenn, Pernille Feldmann, Amalie Lutro and Silje Mathisen will all race for the UCI women’s team at least one year longer. German time trial specialist Mieke Kröger has also extended her contract with the team. With that, the team has now nine riders for the 2021 season. Earlier Norwegian riders Martine Gjøs, Ann Helen Olsen and Anne Dorthe Ysland signed with Team Hitec Products, as did Caroline Andersson from Sweden.

“We are thrilled that we have been able to keep Ingvild, Pernille, Amalie, Silje and Mieke in the team”, team manager Karl Lima says. “We see a lot of potential in our Norwegian talents and are looking forward to see what the future brings, for both themselves and the team. Next to that, Mieke brings experience to our young team, which is worth a lot to us. In 2021 we will have a team that is quite renewed and with a focus on developing talents. Giving these riders the opportunity to both race in UCI race on the .1 and .2 level and on the World Tour level, we are sure they can unlock their potential. Everything from an important thought that we have; to do it as a team.”

In addition to the contract extensions and new additions, Team Hitec Products is also saying goodbye to some of the riders of this year’s team. Vita Heine, Ingrid Lorvik, Greta Richioud and the team part ways. Lucy van der Haar and Marta Tagliaferro will end their career after the current season, while Natalie Midtsveen and Julie Meyer Solvang already ended their career recently. Team Hitec Products thanks all of them for their contribution to a great team spirit and good results and wishes them all the best for the future.