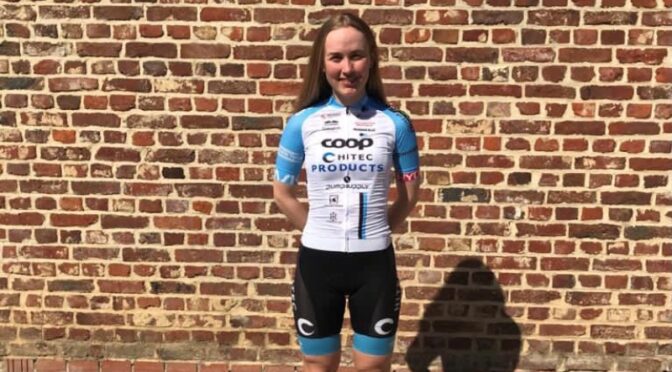 In the first race of Team Coop – Hitec Products in the new team kit, Ingvild Gaskjenn was the first rider of the team to finish in Dwars door Vlaanderen on Wednesday. Together with Amalie Lutro, Gaskjenn ended in the third big group after a very hard race that was won by Annemiek van Vleuten. “I think we worked well together today and we are improving as a team.”

With an average speed of 40 km/hour and a very fast final, the peloton made a hard race of Dwars door Vlaanderen. “We did good, staying in the front in the first 40 kilometers of the race, before the hills and cobbles started”, Gaskjenn looks back on the Belgium classic race. “There were some attacks, but the peloton didn’t let anyone go.”

In the final of the race, the big teams split the peloton in several parts. “The peloton split early, when the hills started. Unfortunately we didn’t have anyone in the front and we also had bad luck with punctures for Anne Dorthe and Caroline. So in the end, it was Amalie and me. We worked well together in the group we were in for the last kilometers of the race.”

On Sunday, the Ronde van Vlaanderen is the next race for Team Coop – Hitec Products.