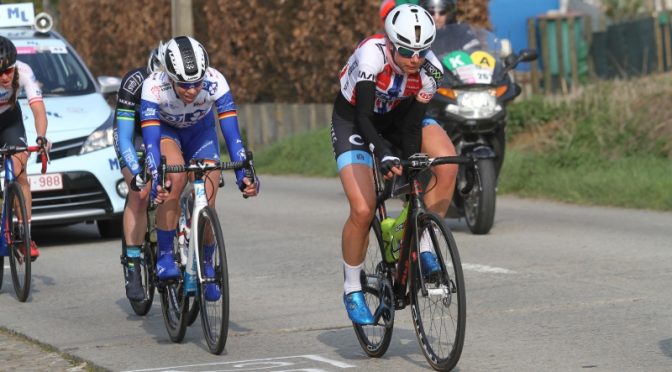 Behind the Italian winner Marta Bastianelli, Vita Heine finished 18th in the Tour of Flanders. The Norwegian champion of Team Hitec Products – Birk Sport rode a good race and showed herself in front. Earlier in the race, Chanella Stougje was involved in a seven riders strong lead group that got a maximum advantage of 3.40 minutes on the peloton.

Stougje was in the early attack, together with six rider from all different teams. They escaped when the 159 kilometers long race was only six kilometers on the way. With 46 kilometers to go, after being in front for more than 100 kilometers in front, the front group was caught.

With the final starting, Vita showed herself in front of the race. She even joined an attacking group in the beginning of the final, but the peloton didn’t let go. Then, with only 25 kilometers to the finish Vita was one of seven riders who tried to escape out of a front group of some more than thirty riders. “I missed the breakaway in Dwars door Vlaanderen and now I wanted to go for it”, says Vita. “It is better to try to go for it in a race like this, than keep waiting.”

Boxed in
The group didn’t let go and they started together at the Oude Kwaremont the group split up in a few smaller groups. Vita ended up in the third group. “We were chasing in that group, but not everyone was working and we couldn’t get back to the front. I got a bit boxed in in the sprint, so I was a bit disappointed about that. It was possible to position myself a bit better.”

Good for the future
However, racing such a good race, Vita could be happy. “Yes, I am quite happy. I always want a better result, but I should be happy with how I races today. I felt really good today. For my self esteem I also needed this for future race. I am very strong at the moment, but haven’t been able to show it in races. This is good for the future.”