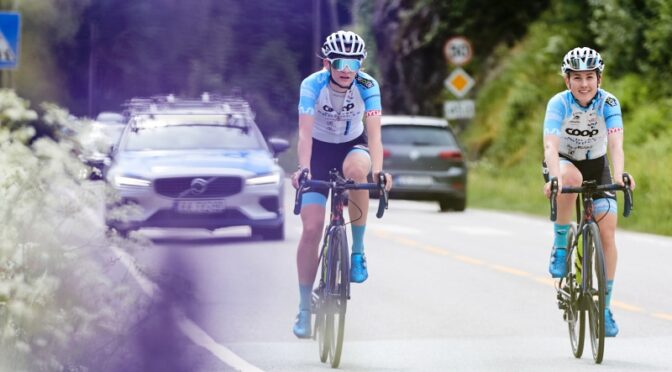 In the French two days stage race Tour de Belle Isle en Terre – Kreiz Breizh, Team Coop – Hitec Products showed itself well. Ingvild Gaskjenn sprinted two a seventh place in both stages, which was good for an eighth place in the general classification. Amalie Lutro went in a long attack in the second stage, to set up the sprint for Ingvild together with Mari Hole Mohr in the final.

“It was two days of fun racing with the girls”, Ingvild looked back after the finish on Friday. ” Stage one was a bit difficult to keep myself in the front group of 20 riders, as a lonely rider, against DSM and Jumbo-Visma. So, I think we got a good result. In the second stage the girls did a really good job during the day, and Mari and Amalie set me up for the sprint, so I could do my best there. It was important to do a good sprint for the GC result, so it was good!”

Amalie, who raced for the first time after breaking her collarbone in the Lotto Ladies Tour, was in a front group for a long time. “I was still getting used to the speed in the peloton after a long time without racing”, she looks back at the Tour de Belle Isle en Terre – Kreiz Breizh. “Today the feeling was better than yesterday, so it was a nice improvement! Our plan was to race for Ingvild and cover all the attacks with the bigger teams in it.”

Strongest card to play
She then ended up in the attack; “I was able to get away with a good group, but I didn’t feel too good, so I tried to play it smart with the legs I had today. The gap did not get too big either so our strongest card to play was still Ingvild in the peloton. Eventually we got caught and after that our main goal was the sprint with Ingvild. Mari, Ingvild and I worked well together in the local laps and it paid off with a nice end-result for Ingvild.”