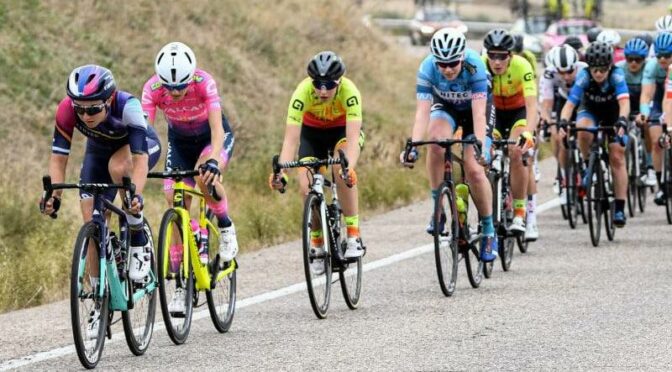 Last weekend was a special weekend. A weekend that brought a big smile on our faces, but also some tears. In the three days World Tour stage race Challenge by La Vuelta the team raced well and Mieke Kröger ended 10th in the general classification. However, as it was the last race of the season, it was also time to say goodbye. To Lucy van der Haar, who ended her career, and to Vita Heina who is leaving the team after seven years.

The Challenge by La Vuelta started with a hilly stage. It however wasn’t hard enough to avoid a bunch sprint. On Saturday, the nine kilometers long time trial was a chance for our specialists, Mieke and Vita. With a 7th and 12th place they placed themselves in the top of the general classification. A flat race on Sunday, more or less a criterium with quite some bonification sprints, was the decider. After three days, Mieke ended in 10th place, while Vita was 14th. In her final three days of racing, Lucy sprinted tot a 14th and 13th place.

“It was a special race”, Mieke looks back on the last three days of a strange season. “Special due to corona and the resulting hazards. But also special because it was Lucy’s last race and also the last race together with Vita. I think we made the best out of the situation, only racing with four and then three. I am happy with our commitment in the sprints that we prepared for Lucy. Personally I am happy with my time trial and also happy with my behaviour in the bunch and in the leadouts.”

When the finale stage in Madrid was finished, there were quite some emotions. Mieke: “I got a little bit of wet eyes after the race, because Lucy became a little emotional. It really was a pleasure to get to know her and race together with her. And we made a step for the Madrid races in trusting another.”