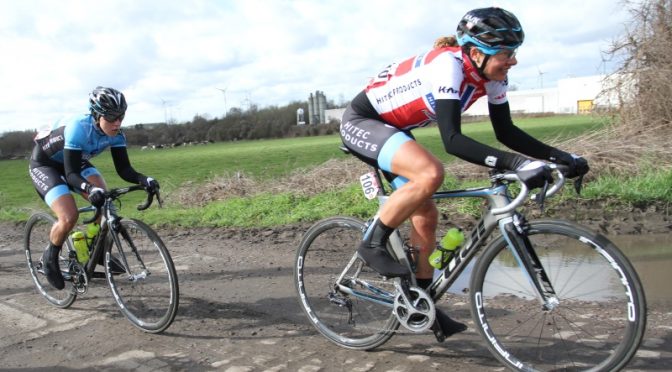 With the Omloop Het Nieuwsblad, Omloop van het Hageland and Le Samyn des Dames, Team Hitec Products – Birk Sport raced their first three races of the season last week. “Three races that we more or less used as training camp”, says sports director Tone Hatteland Lima. “All riders started and all the staff has been together, to create a good at atmosphere and cooperation for the coming season.”

The team stayed together in a big house for a week. “We are happy with our team and have a strong faith for 2019”, Hatteland Lima tells satisfied. “In this team we have three riders that are born in 2000. Amalie Lutro made her debut in an UCI race at the Omloop Het Nieuwsblad, both Pernille Feldmann and Lonneke Uneken debuted a day later in the Omloop van het Hageland.”

For fans and riders, the Omloop Het Nieuwsblad still feels like the real opening of the cycling season. “Chanella Stougje crashed in front of the race, after the Haaghoek. She got a few stitches in her elbow and is ok. Vita Heine got in the chase group behind solo winner Chantal Blaak and ended in place 23 as our best placed rider. In her first senior race Amalie worked well for the team at the front in the first 70 kilometers.”

On Sunday March 3 the Omloop van het Hageland was the second race of the weekend. “Marta Tagliaferro had a strong debut and just missed the break on the last local lap. She finisht as 23rd. We also had a promising debut of both Pernille and Lonneke.”

Only two days later, the team already raced the third race in four days. Le Samyn des Dames is a race that is known for the cobble sections that are in it. “This was a day with good teamwork, but unfortunately also some bad luck. Both Vita and Marta crashed. Chanella was back and togehter with Marta she was in most breaks. Marta had to sprint on one gear and became 17th, while Lonneke finished 21st.”